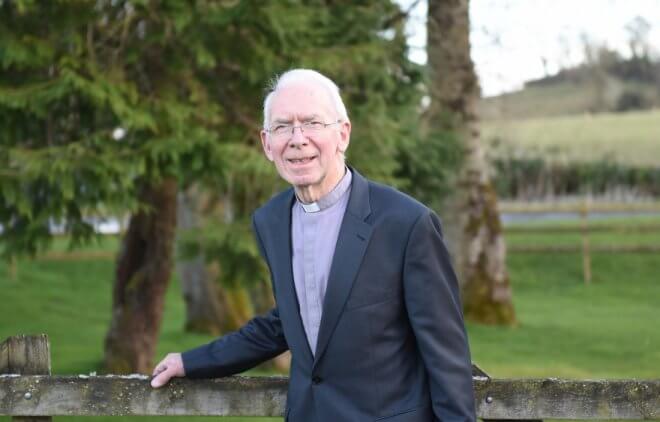 THE giant step that Archdeacon Cecil Pringle took when asked to speak at a Graan Novena of Hope over 10 years ago has, he maintains, paved the way for so many positive cross-community things to happen over the years.
Significantly, he feels that it could even be linked to ‘Crossing the Street’ in Enniskillen when the Queen visited the island town and after a service in St Macartin’s Cathedral, walked the short distance across the street to St Michael’s Church where she met dignitaries.
“Had I not taken that step then it would have been much more difficult for them to have taken the step,” he said.
“That invitation to the Graan Novena was a huge step for the two of us, but I was quite aware of the significance and the possible outcome that might have been when I made it known I was going to speak at the Novena,” said the recently retired Archdeacon. “Really at the end of the day there was very little negativity. I had no problem and it didn’t create any problem in the parish for me.
“Going to preach at that very first Novena was a very big step and there are people around who would say that it made it much easier for things to happen in their churches,” he said, adding that the relationship had lasted with Fr Brian speaking at Rossorry Church during the Week of Prayer and Christian Union annually.  He sees a lot less of Fr Brian now, but still keeps up his relationship with the Graan. Just last week Archdeacon Pringle visited the Novena and Fr Charles.
“Things have changed dramatically since I first came to Bellanaleck in 1969 when there was no contact between the Roman Catholic and Church of Ireland churches.  I can remember the first time I had a priest assist at a wedding in the church. It was a very big step, but fortunately all of it worked out fine, even though I may have been a bit anxious before hand. It all worked out great. I would have had no reason to have changed any of it, none,” he added.
Originally from Clones he’s now retired in Florencecourt, he’s looking forward to some time at home.
He said he found his time in Fermanagh very fulfilling and enjoyed it, but joked he could have retired 10 years ago.