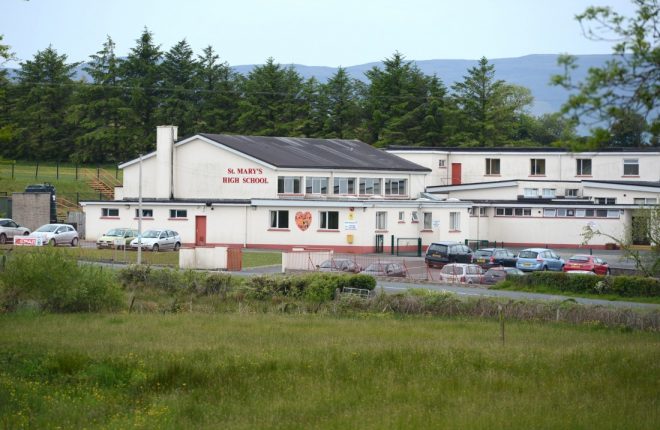 A DEVELOPMENT proposal to close St Mary’s High School in Brollagh has been published by the Education Authority (EA).
Council for Catholic Maintained Schools (CCMS) has announced it is to close St Mary’s High School, Brollagh, which has a current enrolment of 84. If the proposal is accepted the school will close by August 31st 2018, or as soon as possible thereafter.
The Brollagh school’s enrolment has fallen to 84, with only 17 students entering year 8 in 2016. The CCMS had originally tried to close the school when it has 121 pupils but the previous proposal to close the school was rejected in 2014 by then Education minister John O’Dowd.
The current proposal submitted by the CCMS states that “the proposal should be accepted on the basis of the fact that the school is no longer sustainable.”
Local MLA Jemma Dolan MLA said, “At this stage, the closure of Brollagh School has not been confirmed, but a proposal to do so has been put forward by CCMS. That is why I would strongly encourage the entire community to take part in the consultation and oppose this proposal. As a former student, I appreciate the value of Brollagh School and the contribution it makes to our rural area.”
Principal Michael Quigley declined to comment on the current situation but he previously told the Herald in February, “We will continue to offer the first class academic and pastoral provision that we are renowned for. The school’s contribution to this community and rural education, cannot be questioned.”
Magherlough Primary School in Trilick, which currently has an enrolment of 23 pupils is also facing closure. The rural primary school had no admissions in 2016/17.
When asked about both proposals, the CCMS said: “CCMS does not normally make a statement at this stage of the process.”