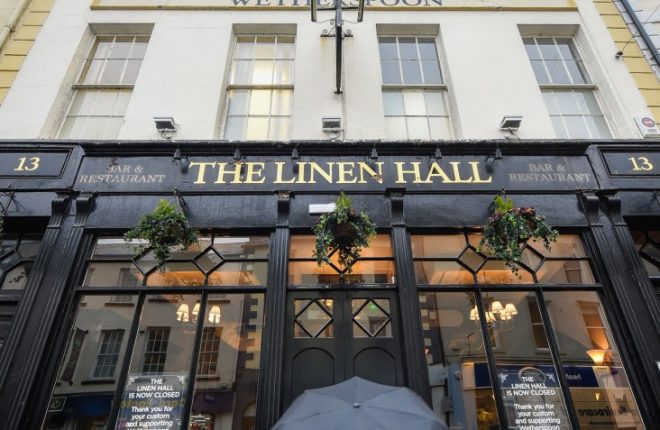 A MAN who walked into the former Wetherspoon’s bar with a cigarette has been given a suspended sentence for common assault on two staff members who removed him from the pub.

Richard Lucy (36) of Beechhill, Enniskillen appeared at Enniskillen Magistrates Court on Monday where he pleaded guilty to two counts of common assault, which he committed while being thrown out of Wetherspoon’s Linen Hall pub on May 5 last year.
Police had been called to the bar at around 6.45pm by staff who said an unknown man had refused to leave when asked, and had assaulted two members of staff, Kim Bellew and Ronan Rehill, while being ejected from the bar.
A number of hours later, in the early hours of the next morning, Lucy identified himself to police. In interview, Lucy made a counter allegation that he himself had been assaulted by the injured parties while being thrown out of the pub.
Defence solicitor Clive Neville said Lucy accepted he was very intoxicated that night, and accepted he’d come into the bar with a cigarette, which he shouldn’t have.
Mr Neville added one of the staff members, Ms Bellew, had “handled the incident in a very robust way”, stating she had pulled a seat away from the defendant, and suggested a “more discreet” method could’ve been used to eject Lucy from the bar.
District Judge Nigel Broderick viewed CCTV footage of the incident prior to the hearing, which he said “paints a graphic picture” of what happened. He said he believed Ms Bellew, as someone in a position of authority, dealt with the matter appropriately and was “more than reasonable.”
Judge Broderick said the footage showed the “blatant assault” on Ms Bellew clearly, which involved Lucy elbowing her as she escorted him out of the bar, and said Lucy’s reaction to the incident had been inappropriate.
The judge said Lucy had a very poor previous record and clearly struggled with alcohol. Mr Neville pointed out Lucy had stayed out of trouble since 2013, had not breached a previous suspended sentence, and had not drank any alcohol since the incident at Linen Hall.
Stating neither staff member had deserved the treatment Lucy had “dished out”, Judge Broderick said there was no evidence of any injuries to either.
He sentenced Lucy to five months in prison, suspended for the maximum of three years, and warned if he was before the court again for any offence in the next three years he faced having the sentence activated.