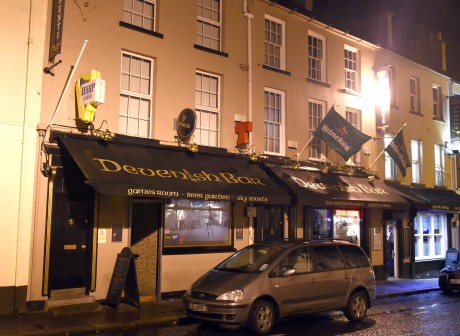 A 29-year-old man has been jailed for a total of 12 months over an assault in an Enniskillen bar.
Ryan Foley of Trasna Way in Enniskillen appeared before Enniskillen Magistrates Court for sentencing on Monday, charged with assaulting Eamon Maguire and causing him actual bodily harm and disorderly behaviour  at the Devenish Bar on July 26th last.
The court heard that the incident occurred when the injured party, who works in another local bar, was approached by Foley who was playing on a fruit machine. Foley asked the injured party why he was banned from his premises and then walked away.
Mr Maguire then ordered food and went back to the fruit machine where a short time later Foley again approached him and told him “he would have to serve him the next time he went to his premises”. Foley added: “What makes you think I won’t trample you and kick you around?” before grabbing Mr Maguire by the side of the head and pushing him against a wall.
The injured party had to attend the South West Acute Hospital to have three staples put in his head and also suffered from nervousness and sleep loss following the incident.
Foley was interviewed by police later that day and made a no comment interview before later saying that the incident never happened. In another police interview, Foley admitted pushing Mr Maguire against the wall but denied it was his intention to cause injury.
District Judge Nigel Broderick was shown CCTV footage of the incident”, described by defence barrister Stephen Mooney as “a substantial offence” as the injured party was having his lunch and the defendant was having a drink. Mr Mooney added that there was “a history” between the two men and “serendipity would have them in the same place at the same time”.
“Mr Foley is criminally responsible but it may not have ben his intention to cause injury,” he added.
The court was told that Foley had 26 previous court appearances and 15 previous convictions.
Sentencing Foley, the judge described the attack as an “unprovoked and unjustified assault” and noted that the defendant had two suspended sentences hanging over his head.
For the assault, Foley was sentenced to three months in prison while the judge also activated a suspended sentence concurrently totalling nine months.