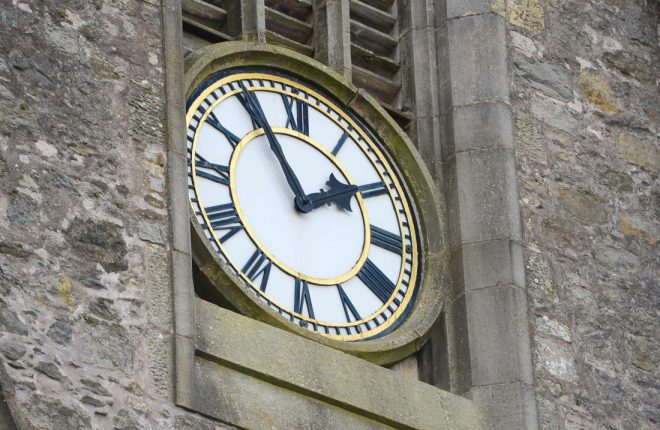 One of Enniskillen’s most iconic clocks is finally back in full working order after falling silent almost 14 months ago.
The tower clock of St Macartin’s Cathedral had been out of action since December 2015  but is once again keeping time and chiming every quarter of an hour after a five day repair job.
It cost almost £10,000 to repair, made possible by generous donations towards the large repair bill.
The clock, which replaced an earlier model, was manufactured in 1935 by John Smith and Sons of Derby. It cost £240 and was the gift of William Weaver, a property owner, stationer and noted news-agent based on Darling Street, in memory of his family.
Over the years the clock has been regularly serviced by technical staff from Smith’s however the passage of time took its toll and a recent inspection report from the firm had indicated that the structure was “beyond satisfactory or economic repair”.
An upgrade of the clock’s auto-winding system was recommended with manufacture, transport and installation estimated at £9,806.
Samuel Morrow from the cathedral’s Select Vestry told the Herald that parishioners are delighted to have the clock, which has served the town of Enniskillen for 82 years, up and running again.
“The upgrading of the clock was an expensive undertaking and the select vestry of St Macartin’s are deeply indebted to those who have made it possible by their generous donations.
“It has been converted to an auto winding system which removes the need for regular manual winding. As a result of the upgrading it will keep time during periods of power failure.
“Those who live in the town will be pleased to know that a chime silencing system has been installed in the clock which means that it will be silent during night time from 10pm until 8am.”