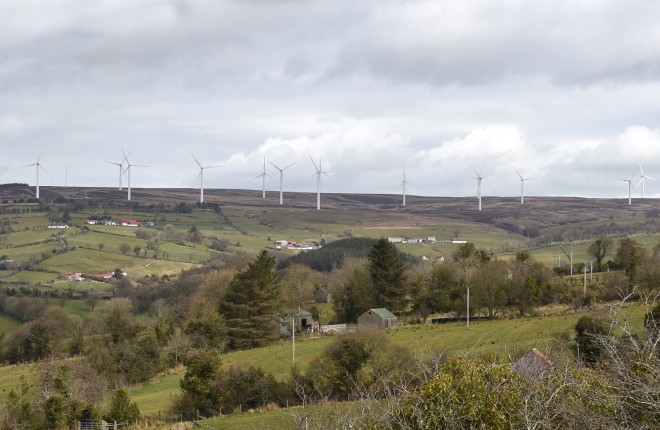 A local windfarm near Lack RMG42

PLANS for a windfarm development that will have a significant visual impact on Lough Erne have been given the go-ahead by planners in the South, without any consultation with residents in Fermanagh.
When built, the massive 136m-high wind turbines will dominate the skyline near Lough Keenaghan in clear view of what is one of our busiest tourist roads going from Lough Erne to Belleek and on to Bundoran.
The decision of An Bord Pleanala (ABP) to overturn a ruling by Donegal County Council (DCC) and grant permission for the five turbines at Derrykillew, just 500m from the Fermanagh border, has been described as “diabolical”.
Donegal council had initially refused the planning application on a number of grounds, including “the unacceptable visual impact on landscape character and visual amenity on the Lower Lough Erne and Croagh and Garvary River areas,” as well as the impact the turbines will have on local bird and bat populations.
An Bord Pleanala later granted the permission subject to 20 conditions, stating “it would be acceptable in terms of impact on the visual amenities or landscape character of the area, would not seriously injure the amenities of property in the vicinity, would not be prejudicial to public health and would not lead to the creation of a traffic hazard.”
Belleek councillor John Coyle slammed the APB decision to grant permission for the development, which he said will be situated on an elevated height above Keenaghan Lough near the Fermanagh village.
“This is something that has slipped under the radar,” said Cllr Coyle. “There were valid reasons given by Donegal County Council for refusing the application, then ABP gave no valid reason that I can see for giving it the green light.
“I don’t understand how they are going to get the wind turbines down the narrow road, and I don’t know where the turbines are going to go. From what I can see, it will be on a small hill in a place where there is no trees to mask them from view.
No drawings have been done to show the visual impact of it, which there would’ve been if it had been the Department of Environment (DOE) or Council here.”
The discussion is especially galling considering the local community in Belleek had not been given a say in the planning application process due to the fact the development is on the southern side of the border.
“It’s diabolical that this is being done, because it effects more people here than in Donegal,” said Cllr Coyle, who said there should be cross-border co-operation on such issues. “It’s totally unacceptable.”
The DOE confirmed to the Herald they had been contacted by DCC and ABP with regard to the application as it was likely to have a significant impact on the environment in the North.
They said they provided their own environmental information and comments on the impact on the landscape from Fermanagh to both DCC regard the application, and made “further representations to ABP before they issued their decision to approve the proposal.”
Fermanagh and Omagh District Council also confirmed they had been contacted by the DOE regarding the application, and also gave their own feedback.
Advertisement