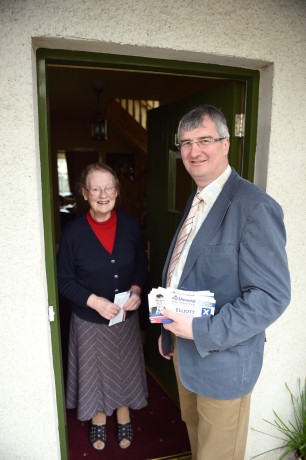 Tom Elliott speaks to Ivy Stinson whilst canvassing in Enniskillen

WHEN you have the support of all the leading unionist parties the campaign trail is far from a lonely place for Tom Elliott.

Speaking to the Herald on Friday while canvassing the Silverhill area of Enniskillen the election candidate was enjoying meeting local constituents.

“The people have been quite positive today, over in the Coa Road especially it has been very good. Probably people were more at home there than here. People have said to us ‘we have an opportunity to have representation’ and I know chatting people in Cavanaleck it’s  just amazing. They were saying ‘Tom, we know you, we know your family, we’re going to vote for you’, so it’s quite encouraging.”

Canvassing is very much a full-time job with Mr Elliott and his entourage, which can vary from between 5 and 12 people, on the road from around 2pm until 9pm every day bar Sunday.

“To tell you the truth you could have 20 out, but I prefer smaller teams because it gives you a better chance to get residents who want to speak to you.

“Obviouslly we would like to do ideally all the places between 5 and 9 at night, but it’s virtually impossible so we do have to do some during the day. We don’t usually start until 2pm in the day so there’s at least some people about home from work and maybe picking up kids.Saturday we probably change the time, but by and large those are the timings.”

Some of the more notable members in the team are local DUP councillors, who have also, he hopes brought the party vote with them.

“I’ve listened to them (DUP voters) on the doorstep, they’ve clearly said we want to vote for Tom Elliott, we want to get him in and that’s what they’re saying and those that have been out with us are saying exactly the same thing. Look we have differences of opinion in politics and that goes without saying, but this campaign we have the one agenda.”

Life though isn’t always rosy on the campaign trail, with aggression and hostility sometimes raising its head.

“I haven’t had a great lot, generally you don’t, people are fairly polite. You will get the occasional one that will be extremely aggressive though. It happened once the other night in south Tyrone, it was outside Killyman.

“The person wasn’t just against me, he was against all politicians. Some of the language is not repeatable ‘you f-ing Tom Elliott, don’t you ever f-ing come to my door, putting your literature through it, you are all the same and I don’t want any of you near me,  f-off’. And he stood and he squared up to me, and put his head in towards mine.”

“It doesn’t give me concern if people are like this though, I try to walk away. With people like that I don’t want to get in a row with them, sometimes it’s difficult when they’re really in your face, but I try not to let it bother me.”