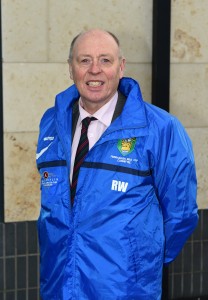 Robbie Walker will manage the Fermanagh Milk Cup Premier side.

Fermanagh has appointed its Milk Cup managers for 2015.

Robbie Walker has been given the task of leading the Premier side in this year’s competition, while the Junior management role has gone to Sam Gamble.

Both coach at Ballinamallard United and are relishing the task of preparing county teams for one of the most prestigious youth competitions in Europe.

A delighted Robbie Walker said, “I am so looking forward to the job. In previous years this job has eluded me, but I am delighted at being appointed to the premier position.”

Walker was manager of the Junior squad in 2008 and assistant manager to the premier squad in 2009 and 2012. He is particularly happy to be working with the Milk Cup director of football John Quinn.

“I worked with John for a number of years at Ballinamallard, both at under 18 level and Irish Reserve league level. It will be great to team up again to develop this squad for what is a massive competition,” he said.

“I would expect to try to do one better than last year. We will be looking to win something, maybe in the middle tier competition, depending on the draw.

“It all boils down to the draw in the Milk Cup. If you can get a good start, playing a team at your own level then you can get something out of it.
“I know there are a lot of talented players in the county and I’m looking forward to seeing them all over the coming weeks,” said Walker who hopes to begin trials in February.

“I’ll be watching Fermanagh and Western youth games as well as National League fixtures to keep in touch with all players who may be eligible,” he added.

“It’s great to know that I’ll be sitting in the dug out as the number one man. I’ve had aspirations to do this job for some time. I want to play attractive football. I want my players to get the ball down and play. I want them to be able to express themselves. It’s a great opportunity and if we can do that then the results will come.”

Sam has been working with the 2000 age group at Ballinamallard for several years now.

He’s delighted with the appointment as he has already worked extensively with this age group.

“It will be great to bring them up to another level in their playing careers,” he said. “I know a lot of the players in the county through the  Brendan Keogh Youth League and have fair idea of players in other counties through the National Youth League,” said Gamble.