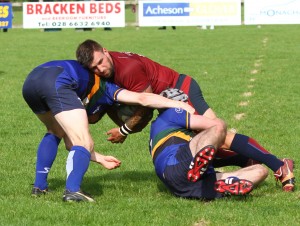 Jamie Johnston was among the tries for Enniskillen

Enniskillen First XV registered a fantastic victory in Round 2 of the Millar McCall Wylie Junior Cup at the weekend, beating league above side Dromore 19-3 in a great display of physicality and determination from the side.

In addition to a memorable result it was a fine performance and exciting to watch, with Enniskillen refusing to revert to a one dimensional style of rugby despite a strong wind and fairly wet conditions.

The contest was an arm wrestle at the beginning with Enniskillen seemingly intent on making up for the run of scores conceded in the first half in last week’s game against Coleraine. Penalties came in the middle of the park for both sides, mostly from infringements around the breakdown, but these were difficult to convert into opportunities as the line out was scrappy from both sides in the first half.

Dromore had plenty of possession but the Enniskillen defence was much improved and an extended period of pressure early on from Dromore inside the Enniskillen 22 metre amounted to nothing following good drift defence from centre Nathan Richmond and excellent work on the ground from Jack Harte.

It was after this that Skins started to really exploit the major weapon in their arsenal, the scrum. A Dromore put in on the half way line eventually resulted in an Enniskillen penalty, then a quick tap and destructive carry from Jamie Johnston with a clinical clear out from Michael Cadden put the back line on the front foot. A knock on then from Dromore after a probing kick from Neil Carleton gave Enniskillen the perfect opportunity with a scrum on the five metre line. The front row of Steven Fox, Ryan Cathcart and Gareth Beatty then ruthlessly punished the opposition for a number of scrums as the Dromore forwards continued to be penalised, before number eight Jamie Johnston eventually crossed the line for a try.

Enniskillen continued to show patience in defence and were content to allow Dromore to attack, David Buchanan was pivotal on a number of occasions in wrapping up the ball carrier in his typical physical style and shutting down the Dromore forwards at source.
After an extended period of attack, Dromore did finally manage to come away with a penalty before the half and keep pressure on the home side.

Enniskillen started the second half well and the physicality was intense, and eventually a Dromore infringement allowed Donagh O’Callaghan to extend the lead to 8-3.

Another missed kick to touch from Dromore and excellent kick and chase return from Ashley Finlay forced a knock on and gave the Enniskillen scrum another opportunity, resulting in a penalty and kick to the corner. The line out worked well and the driving maul was brilliantly executed by the pack, Jack Harte going in at the corner.

A big defensive effort was required yet again from Skins as Dromore ended up deep in the Enniskillen half and a maul from the visitors was well dealt with by the home side. Excellent clearance from O’Callaghan and another Dromore knock on, due to pressure from Kaine Holden, gave the Enniskillen scrum another bout and effectively another penalty and three points from the boot of O’Callaghan.

Skins had taken control of the game now and looked confident in attack. The pressure resulted in a Dromore infringement at the breakdown and gave O’Callaghan a further three points before the full time whistle for a 19-3 victory.

Head coach Norman Richmond was encouraged by the result against a Qualifying One side.

“I was extremely pleased with the performance displayed on Saturday. The players demonstrated maturity coupled with clinical finishing and a positive attitude to wearing down a good Dromore team.

“The team took their opportunities well and ultimately led to an excellent result. Hopefully this performance and result will further strengthen the Skins as we continue with the league and Junior Cup run.”

The First XV have a week off now due to postponement of their game against University of Ulster Coleraine. The Third XV play at home this weekend to Cookstown.