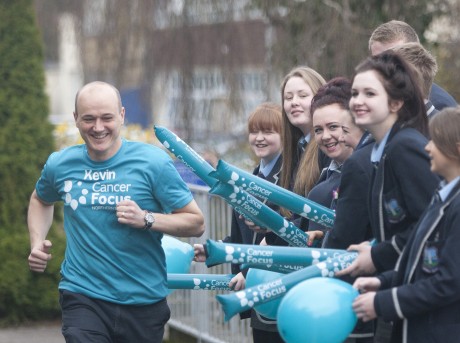 On Sunday London host its 34th annual marathon and this year teacher Kevin Feeney is flying the flag for Devenish College.

Originally from Kent in South East England Kevin has been a teacher at Derrychara site since 2002 witnessing the transition through to Devenish College in 2009.

A keen fitness enthusiast the Head of English is now embarking on another major test of endurance.

“I did the Belfast marathon for the same charity I am raising money for this year Cancer Focus in 2009 and I’ve done a couple of Iron distance triathlons so this will be my fourth marathon really.

“I suppose it keeps me out of trouble, I’m interested in fitness obviously and it’s a nice thing to do, to be able to raise money for charirty and such a worthwhile cause like Cancer Focus.”

To date, including his previous endurance feats Kevin has raised over £4,500 for charity. He is indebted to the friends and family and those at school for their support, this time around helping him raise over £1500 for Cancer Focus.

“The thing about school is you only have to say I’m doing a marathon for a cancer charity and they just hand you money all the time. I’m just trying to wind it up today and people are still handing me money. I would have been pleased to raise about three or four hundred pounds for the school, but I’ve got £750, it has really been amazing.”

As part of his training Kevin has been doing three short runs during the week and longer distances at the weekend.

“I’m not a fast runner and I don’t run at a very intense speed, it’s the mental challenge for me to keep going and to keep concentrating.

“The two marathons I did as part of the Iron Man they were up around five hours, but of course I was swimming and cycling before those and the Belfast Marathon I did in four hours and I’m hoping to do London in about four hours, because it’s flat and apparently the crowd create a lot of atmosphere and that’s meant to keep you going . The problem is you have got 35,000 other people doing it and the streets of London can narrow quite a bit so I will be happy to finish and I will be happy to finish in around four hours.”

“I’m really, really looking forward to it, I used to work in London, and running across Tower Bridge and things like that will be really lovely. There’s so many people behind you when you do something like this, you’re not just doing it for yourself, although it is a challenge, you’re doing it because people have given you the goodwill and the motivation to do so.”

Kevin may race on Sunday, but come 9am Monday morning he will be back in station at Devenish College.

“When I did the Belfast marathon I remember coming in the next day and feeling quite stiff, but I think I have a better recovery plan this time. My recovery plan is a pint of milk and a couple of bananas and as long as I get that within half an hour of doing an event I find I’m a lot better.”

To donate to Kevin’s marathon fund you can visit his justgiving website at www.justgiving.com/cancerfocus2014