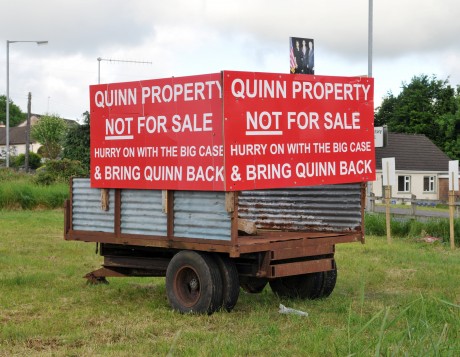 THE fall-out from a leaked telephone conversation between two senior Anglo-Irish Bank executives back in 2008 has given a Sean Quinn support group fresh impetus in its campaign to have Mr Quinn reinstated as head of the Quinn Group.

The tapes suggest that the two executives knew that in asking the Central Bank for a €7 billion bail-out for the troubled Anglo, they were deliberately underestimating its plight.

Concerned Irish Citizens, in a statement, said they were ‘appalled, but not unduly surprised by this week’s revelations’ (in the ‘Irish Independent’), and called for a public inquiry.

It has consistently accused Anglo Irish Bank’s management of lending to customers, including Mr Quinn, to support its own share price and of over-stating the bank’s profits.

They said this week: “In light of these explosive revelations, we now call for a full public inquiry into what happened in Anglo and its strategy on Quinn, a strategy that has cost us billions and the loss of over 2,500 jobs in Quinn companies to date.

“Government ministers have acknowledged that it is very difficult to get business into the border counties, so we deserve the truth about what was done to the greatest entrepreneur that this country has ever produced, Sean Quinn and to our communities.

“It’s time that we got answers about why taking him out appears to have been more important than common sense.”

Sean Quinn took out some €2.88 billion by way of shares from the Bank, but he has consistently argued that these were ‘tainted’ loans.

The Quinn family who, along with 10 clients of Anglo-Irish Bank, took over their father’s shares in July, 2008 are seeking documents and/or notes of high-powered meetings in early ‘08 revealed in last Sunday’ s ‘Sunday Independent’.

It is part of their legal action to find out who, at the highest level of government, knew about their father’s €2.88 billion ‘loans’ from the Bank long before the takever of the Quinn Group.

Meanwhile, huge, fresh signs in support of Sean Quinn have gone up at the roundabout at Derrylin linking the Lisnaskea road with the roads to Ballyconnell and Belturbet.

One reads: “Hurry on with the big case’, a reference to the pending legal contest between Mr Quinn and the former Anglo-Irish Bank about ‘tainted’ loans.