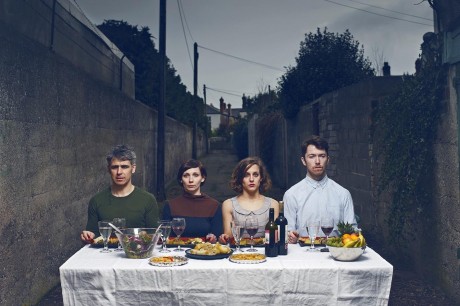 HE’S BACK..Local dancer Dylan Quinn is concluding his nationwide tour of new production ‘The Meal with two performances in Enniskillen

Local dancer Dylan Quinn is concluding his nationwide tour of new production ‘The Meal’ with two performances in Enniskillen.

From the financial crisis in Greece, to the uprising in Tahrir Square, some of the world’s most recent socio-political events are the inspiration behind an exciting new piece of dance theatre currently touring Northern Ireland by Dylan Quinn Dance Theatre.

The Enniskillen based dance company has brought together artists and social commentators from across Europe and the Middle East in exciting and challenging physical theatre performance The Meal which explores differing opinions and experiences through the unifying act of sitting down together to eat.

Concluding it’s tour of Northern Ireland with two nights at Portora Royal School in Enniskillen on June 28 and 29, The Meal sees Dylan Quinn and three other performers (Jenny Ecke, David Ogle and Vasiliki Stasinaki) physically and virtually indulge in a rich mix of food, movement and conversation.

Amongst the performers are a child of East Germany and a Greek dancer, but unseen collaborators include an Egyptian  writer and activist and a Palestinian artist.  Throughout the course of The Meal a range of issues are explored in relation to the social and political changes that the people involved have witnessed and lived through.

“The Meal is providing us with a wonderful opportunity to share our experiences of past and present issues of social and political change within our own lives.

“As artists working now it is exciting and inspiring to be in contact with others seeking change in their communities. I am delighted to be working with artists I know and trust in developing this new dance performance.”

“Having such a well respected and influential theatre professional on board will give an added dimension to this production which combines dance, theatre, music, visual art, spoken word and video installation.  We hope to provoke, question, stimulate and inspire.”

One of the collaborators is Dina Matar, a Palestinian artist based in Gaza.

A female artist working in a repressed society, Dina’s vividly colourful and vibrant work comments on the challenging and harsh reality of her environment, but depicts it from a perspective that is full of hope and optimism.

Her work has exhibited widely in the Middle East, France, Switzerland and the UK but The Meal is the first time it will be seen in Northern Ireland.

Speaking on her involvement in the production Dina commented:

“I loved being able to participate in The Meal.  One of my paintings will appear on the table itself, and so I feel in some special way I will be present in the performance despite the actual physical distance. I am very happy to be part of the joy that art can bring.”