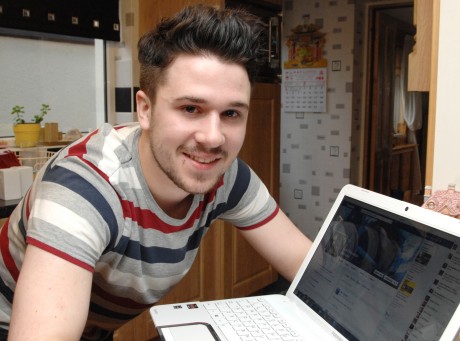 THE past 17 months has seen as many as 16 reported suicides in this county, and this week, Mental Health Awareness Week, a young man who attempted to take his own life late last year, has spoken of his ordeal.

Kurtis Johnston, a 22 year old from Maguiresbridge, described the method he used in order to kill himself in August of last year.

The Maguiresbridge man – who suffers from a sub threshold of bi polar disorder – reflected on the moment he closed his eyes knowing that he would not wake up, to his life now, one he describes as ‘happy’.

“If this makes me sound like a coward – then I’m a coward – but I didn’t want it to hurt. I just wanted it to go.”

And he waited for his parents to leave the house before he attempted to take his own life.

Kurtis woke up in his hospital bed, however, watched over by his shocked parents.

“I was just at a point in my life when I had so many things going on in my head that it was beginning to take over my life, I couldn’t function properly on a daily basis,” he said.

Both struggling to come to terms with his mental health, and a barrage of crude online bullying, left Kurtis in a difficult place.

“I was getting messages from people I didn’t know,” Kurtis explained.

“Messages about my mental health; commenting on my sexuality, it was always negative – a jibe. It was trying to make me feel worse than I was. Saying I had STDs – saying to people I’d been friends with, ‘Did you hear he has this, has that – he’s not all there’.

“I didn’t know how to brush it off as easily a someone else might do it.”

And he felt that he had no-one he could turn to.

“Because I’d no-one to talk to I was very low. I was embarrassed – I didn’t want somebody to think ‘it’s just somebody trying to take the piss – it’s not that at all. I didn’t know who to go to, I didn’t know how to stop it.”

Kurtis began to take illegal drugs that he thought would keep himself ‘level’, and as a result found himself in debt. “I didn’t want to be like that. I didn’t want to have those problems.

IT’S NINE months on from that fateful day and when he spoke this week, Kurtis’ attitude could not have been more different.

“I’m happy where I am at the minute. Everybody has dreams – if I could be, I’d be a millionaire – but emotionally, I’m happy where I am. Now I feel sorry, I feel stupid, and I’m sorry for putting my friends and family through that. But at the time it wasn’t like that. I felt like a problem, it’s not that you’re a human being, you’re a problem.”

And he offered his own advice to those facing difficulties:

• Call Lifeline: 0808 808 8000 if you need confidential support services and advice, or are concerned about someone else.  This is a free helpline service available 24/7.
You can also access the website www.lifelinehelpline.info.