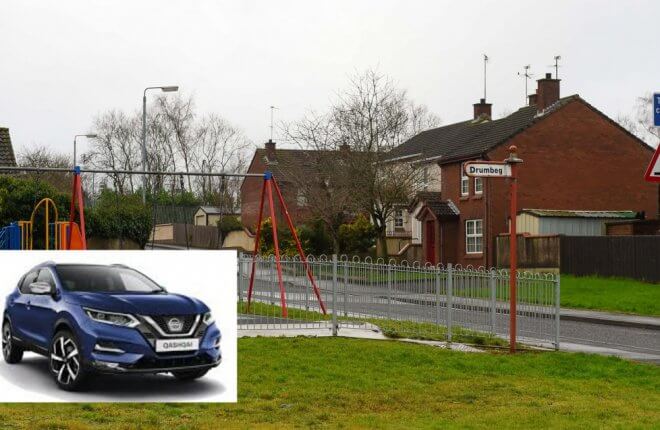 SCENE OF THE CRIME… Drumbeg in Enniskillen where a family was targeted by the burglars at midnight who had stolen her parents’ jeep (similar to the one pictured).

AN Enniskillen family have appealed to the local community to review their home security after becoming the latest local victims of burglary.
The Rooney family from Drumbeg were targeted by three burglars at around midnight last Friday. John and Kathleen Rooney had just gone to bed while their daughter Sonia was upstairs and heard noises coming from downstairs. She ran downstairs and discovered the keys to her father’s Nissan Qashqai SUV were missing. Realising that her house had been disturbed, Sonia ran out the front door to find the culprits making off with the jeep.
Hours later gardai in Carrick-on-Shannon detained the three individuals after the jeep they were driving was identified as the one stolen during the burglary. The trio were brought to Carrick-on-Shannon Garda Station after being stopped near Boyle in Co Roscommon on Friday morning.
While the car was badly damaged when recovered, Sonia’s sister Angela says her family’s experience is a timely reminder for her friends and neighbours to think about their own home security.
“Small things like making sure all your locks are in good working order and keeping an eye out for any suspicious activity in your neighbourhood can make a difference.
“Social media is also a good tool to help warn people. No matter how small, if it doesn’t feel right, report it as it may turn out to be very significant to someone. Keep an eye out for elderly neighbours especially those who live alone.”
She added: “We were very lucky that the culprits were caught and want to thank both the PSNI and Garda for finding them so quickly. This was partly due to the fact that my sister disturbed them and was able to notify the police immediately. Not everyone is that lucky to get this outcome though.”
“Anything we do have in our homes belongs to us because we have gone out and paid for it so no-one has a right to come in and take it!
“However it’s the lasting effect it has on the homeowner that is the most damaging,” Angela added.
A garda spokesman told the Herald: “Three people; a juvenile female, a man in his late teens and a man in his 20s appeared at Carrick on Shannon District Court on the 17th February charged in relation to this incident. The two men were remanded in custody to appear at Harristown District Court on Friday 23rd February. The female was released on bail to appear in Carrick on Shannon Court in 23rd March.”