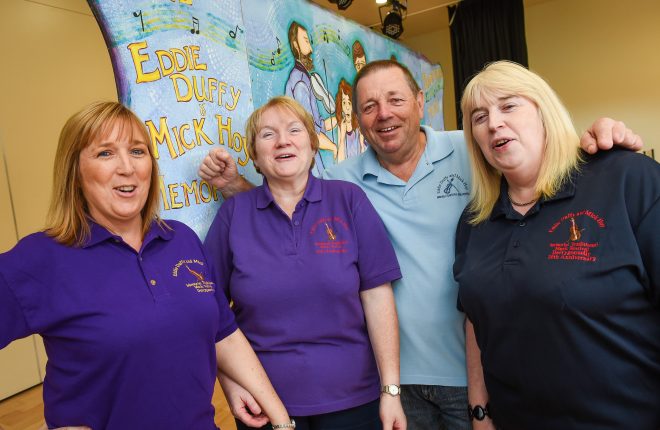 Yvonne Burke, Patricia Dolan, Gerry Walmsley and Irene Kirkpatrick get warmed up for the Eddie Duffy and Mick Hoy Festival with a few tunes RMG44

One of the biggest festivals in the county returns to Derrygonnelly this weekend.
The Harps village hosts its annual weekend of celebration for traditional music with the Eddie Duffy and Mick Hoy Memorial Traditional Music Festival.
The festival runs from tonight (Friday) until Sunday with a host of events for young and old organised by the hard working committee.
The hard working band of volunteers led by John Doogan, includes three sisters Irene Kirkpatrick, Pauline Dolan and Yvonne Burke. Added to that there is Seamus O’Dare, and Sean Flanagan.
On the opening night is a big one with the Community Centre hosting the opening concert.
All Ireland button accordion champion John McCann from Coa will be on stage. John will receive a special presentation for his achievement in the All Ireland Fleadh this year.
The popular Cavan Bucks are also on the bill for the opening night when they launch their new CD.
New boys on the block, The Tumbling Paddies with John McCann, Leigh Jones and Martin Treacy are hoping to follow in the footsteps of the well known ‘Whistlin’ Donkeys’ and play to a home rapturous audience. They are making a great name for themselves at the moment playing gigs all over the country.
Add to that the appearance of the McKeaney sisters who are also launching their new CD with track ‘From the Hearth of Glen’ and ‘Home is where the Hearth is’, and champion dancer Colum Higgins and you have an outstanding programme to launch the popular festival, celebrating its 31st anniversary.
Also that evening there will be the unveiling of the 2016 Maid of Carrick.
Then on Saturday there is another packed programme of events showing the wealth of talent in Fermanagh, starting with an open junior session in the Cosy Bar. Visiting and local musicians will also be in Old Pal’s Bar with an open mic singing session in Doogie’s Bar.
That night there are sessions in all the pubs from 8pm onward.
On Sunday there is a Folk Mass in St Patrick’s Church at 11.30am featuring the Cleenish and Botha choir and in the afternoon it’s everyone’s favourite with street entertainment from 3pm until 6pm.
It will feature a wonderful array of music, song and dance with the headline act the Byrne  Brothers from The Glenties in Donegal who have appeared on the Late Late Christmas Toy Show.
Jonathan McCloy from Derry will be there too with his Northern style solo dancing session in Doogies Bar from 6pm until 8pm. He is reviving old style dancing in the Fermanagh area and is looking for as many people to get involved as possible.
It’s a weekend not to be missed with plenty of music, song and dance for everyone. Make sure you are there.