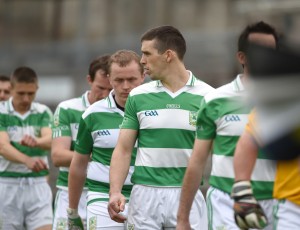 Barry Owens, happy to be among his own RMGFH72

The start of this year’s league campaign last weekend will have come as something of a relief to the majority of club players, signalling the end of many weeks of torturous pre-season training and challenge games.

This has been the first year I have completed my club’s entire pre-season programme and I for one am glad to see the start of the league.

As a county player I always saw the start of the club league as an end to the national football league and the start of the intense preparations ahead of the Ulster championship. We were traditionally given a week or two off from county training to go and train with the clubs and I always looked forward to this time as it meant you got to train at a more moderate pace with your friends – a welcome reprieve from the intense stuff at inter-county level.

One of my most vivid memories of returning to club competition was back in 2008 when I had worked my way back from my heart operation. I had been focusing on improving my fitness levels with Fermanagh and missed the entire national league, so to get back playing at club level was a major step.

We played Tempo on that particular day and I came on for the last 20 minutes at full forward. Sean O’Reilly was our manager at the time and I remember him telling me to go on and to try and not do too much, to concentrate on getting the ball and to give it to the nearest Teemore player. With 10 minutes left I was moved out to midfield and again Sean told me to take it handy, but I got a ball and looked around and saw the pitch open up so I decided to go on a run. I ran about half the pitch and passed the ball to a colleague.

I was wrecked. It’s fair to say that my enthusiasm had got the better of me and I honestly felt like my heart was going to burst through my chest – but at the same time I didn’t care, I was back playing the game I loved for my club.

The club scene is usually overlooked when the Ulster championship starts.

The majority of adult players are either left without football for weeks on end or playing catch up with double fixtures over a weekend. Having been involved with the county I can understand the county managers reservations about letting players play for their clubs in the middle of the championship because they want to have their best player’s injury free and focused for the duration of the competition.

This can be a frustrating time for club players and substitutes on the county panel as both are getting little or no football and yet training as intensely ever.

I know how this feels first hand because in Peter Canavan’s last year in charge I was unable to claim a starting position and I ended up playing maybe five to ten minutes at the end of a game.

It’s fair to say I was getting frustrated on the bench but thankfully at that time the club were having a seven-a-side competition for all the adult players in an effort to break up the monotony of training. It might not have been a full game but there was a bit of competition to it and for that I was glad.

For subs on the county panel it can be a difficult to say the least. They are doing the same concentrated training regime that the first 15 have to do but have limited chances to improve their match fitness and demonstrate their abilities in a competitive context.

When compared to inter-county football I think it is sometimes easy to overlook the importance that club football has and in particular the annual club league campaign which brings with it regular fixtures. Getting regular game time in a competitive context is vital to any player and doing so with your club is always a rewarding experience.

I remember doing a question and answer piece for a match programme whilst playing for Fermanagh. I was asked what my most memorable moment in football was. I answered that it was winning a minor and senior championship with my club. One of the younger lads asked me how I could put that ahead of winning an All-star. The answer I gave him was that the club is where you start playing football and where, in most cases, you finish playing and winning a championship with fellas you grew up.

That tops any individual award.