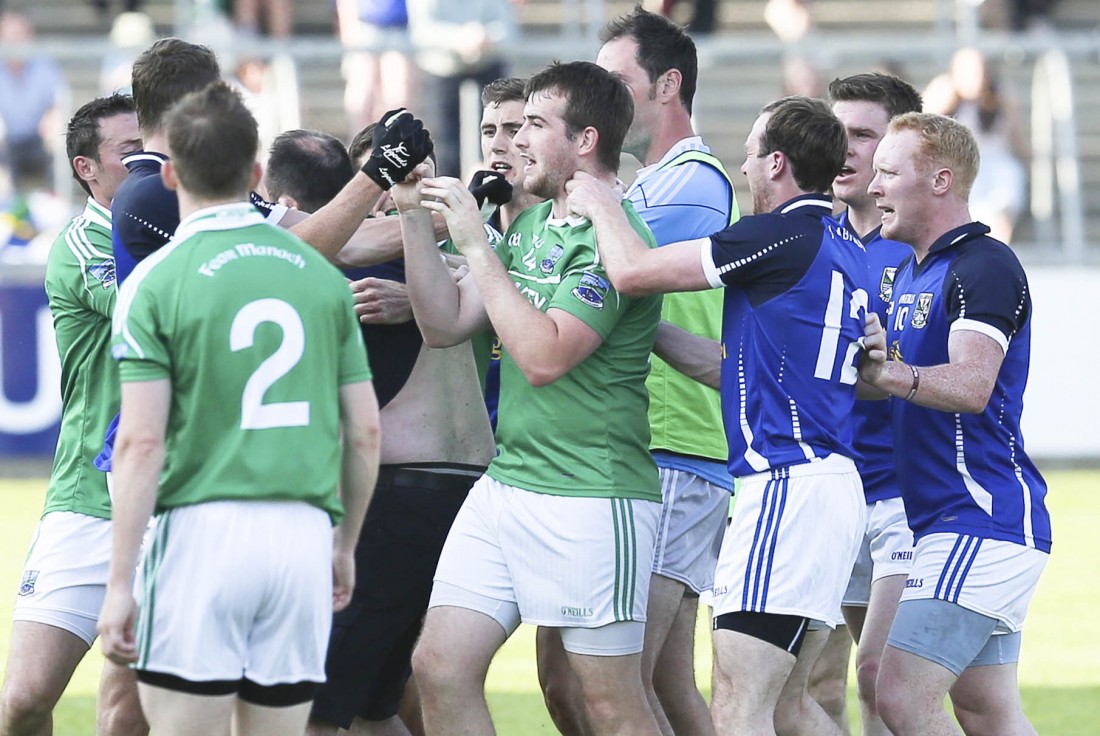 Sean Quigley at the centre of the row at half time. DP68

THE Fermanagh county board is poised to appeal the sending-off of full-forward, Sean Quigley for his alleged part in a halftime fracas in which players and officials from Fermanagh and Cavan were caught up in.

A still enraged Fermanagh Liaison Officer, Ger Treacy, speaking to the Herald on Monday, insisted Fermanagh did not start the fracas.

“We will review the stats. We felt our players were more and more frustrated because they were not getting their fair share of the frees that were going. We just seemed to take a lot on board to get our frees whereas Cavan seemed to get frees a lot easier.

“There were instance where our players were bodychecked or hit after the ball and nothing done about it.”

As for the fracas itself, Ger explained that he was coming down from the stand to join the players coming off the field.

“There were a few exchanges, being close to each other, and from a Fermanagh perspective, I saw our players get blocked off as they headed to the dressing-room, and that led to only one thing: confrontation.”

Viewers of ‘The Sunday Game’ were shown clips of the fracas which, in Ger Treacy’s opinion, amounted to nothing more than a ‘pushing and shoving’ match.

“I saw worse on the pitch itself than anything that Sean Quigley did. No, we had no inking at all in the dressing-room at halftime that he was going to be red carded. None at all. So, if the referee had come in and told us he was going to send Sean off, we could have prepared for it at halftime, but, this was the referee taking central stage again.”

Ger stressed there were no bad vibes between the teams prior to the game, with no spill-overs from the c’ship game at Brewster Park on 16th June.

“The referee that day did not allow it to get out of hand, and we thought that Saturday’s game would be the same. It is a man’s game, and there are always going to be tough tackles and one or two players losing their way, but it’s down to the official and the way it is handled and kept under control.

“Unfortunately, that didn’t appear to be the case on Saturday evening. The sending-off left it very difficult although, in saying that, we could have had three points at the start of the second-half, two frees and if Sean had been there, he would probably have put them over.”

So, Fermanagh again bow out, but not without cost.

“I don’t think people understand the amount of time that the players, the team management and the backroom put into preparing the county team, and to end up where we’re at, it’s hugely frustrating.”

As to the future of the manager and his back-up team, Ger said nothing would be done in haste.

“We didn’t play well, OK, but we don’t believe we got a fair crack of the whip. But, like we did last year, we will take time and reflect on the year gone by, and sit down and talk to the county board and the players, and a decision will be made.”

Meanwhile, Marty O’Brien (25) frankly admitted that Fermanagh ‘did not perform as well as we should have’.

But, he too felt the officials erred in sending-off Sean Quigley arising from the fracas which he described as ‘handbags stuff’.

“They were very lucky to pick one man out of 40 and, had the referee told us at half time that he was sending Sean off, it would have meant a lot to us.”

A quantity surveyor based in Sligo and Belfast, Marty said the sacrifices he had made to be part of the squad, were nowhere near those made by others.

“You had people coming from Dublin, lads with young families, and so on, so I am lucky in that I am young. There’s a good set-up and a good feeling in the squad, and a good spirit. It ‘s just pity we let ourselves down.”