SIX cows who were rescued after being stuck in a slurry tank on a farm near Irvinestown have had a “lucky escape”.
An emergency call was made when the stricken cows, at an address on the Lettermoney Road near Irvinestown, were discovered.
Two Fire Service appliances from Enniskillen Fire Station, one from Irvinestown, the Large Animal Rescue teams from Omagh and Newcastle Fire Stations and three Specialist Rescue Teams from Central Fire Station in Belfast attended the incident.
Firefighters used a specialist slings and large animal rescue equipment to rescue the cows. The incident was dealt with by 5.01pm with all six cows having survived their ordeal.
David Brown, President of the Ulster Farmer’s Union (UFU) and a farmer himself based in Florencecourt stated that the cows were very fortunate to survive given how deadly slurry can be.
He said: “Given the amount of time the cows were stuck in the tank, I would definitely say that they had a lucky escape.
“They were fortunate that we have a good animal rescue team from Omagh, not to mention the other crews that arrived from the rest of the country, that were on hand to get them all out safely.
“However, as farmers, we don’t want to be putting our fire service under pressure because they have other things to do. It’s important that farmers are careful and don’t allow animals to be at a risk of falling into these tanks.
“Slurry is waste and faeces from cattle. Those tanks, in most cases, are about eight-foot deep. If you have to mix slurry, there would be a safety hatch that you would open.
“I don’t know much of the details of the case involving those cows that had to be rescued. But what I would say is that common sense would suggest that if the hatch is open and you’re going to mix slurry, the first thing is that the cattle should not be in the shed.
“That’s an important part of this because the one tragic circumstance that is involved with slurry is the gases that it produces which give off when you go to mix the slurry. These gases are poisonous and sadly, in the past, those gases have claimed a number of fatalities.
“It is good advice to remove the animals from the shed as that takes away the temptation for the farmer to be in there as well.
“Once you start to mix the slurry, you should stay out of the shed for at least 30 minutes because that’s when the gas is at its most potent.” 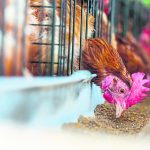