A FERMANAGH couple have raised health concerns over the conditions on the Enniskillen to Belfast bus route, after a “traumatic” pre-Christmas journey during which they endured “suffocating” heat.
The couple also called for simple steps to be taken to improve the lacking public transport provision in the county, particularly in light of local patients now needing to travel to Belfast, Derry and Craigavon as a result of the suspension of SWAH emergency surgery.
Jenny and William Methven live near Belcoo and earlier this month “made the mistake” of deciding to take the bus to Belfast to do some Christmas shopping. While the journey on the 261 service from Enniskillen to Belfast was busy – with no extra buses put on by Translink that weekend, despite it being just weeks before Christmas – it was on the return trip things became not just uncomfortable but unhealthy.
In a letter to Translink chiefs, Jenny said she frequently used the service and never found it enjoyable, but this Saturday journey in particular “became a traumatic one.”
“It started with a crush of people jostling to get on the bus in Belfast. There was no queuing system and the bus had come into the wrong stand adding to the confusion,” she said.
“Both my husband and I are in our late sixties and I have high blood pressure. We found it very distressing to be involved in such a scrum, as did many other people.”
It only got worse from there.
Having got a seat on the top floor of the double decker, the couple noticed it was hot and stuffy, with no ventilation, and the temperature was rising “alarmingly”. Using an app on his phone, William noted it was 26 degrees, while outside it was only 4 degrees. Passengers were packed in, with no air flowing.
“It was really unhealthy and horribly suffocating,” said Jenny.
The couple brought this to the drivers attention, who said they would talk to an inspector in Dungannon. When they reached Dungannon, the couple found the inspector themselves and brought him on to the bus to show him the conditions.
Stating most complaints were usually about buses being too cold, he said the driver had not known how to use the bus ventilation system properly.
Jenny recalled how in recent years a private operator, Hannon Coaches, had been denied a licence to run an express service from Enniskillen to Belfast, despite overwhelming community support locally for the service. In her letter to Translink, Jenny said this had left “the travelling public subject to the abuse my husband and I experienced at the hands of Translink’s monopoly.”
Speaking to the Herald, Jenny also noted that those who will have to travel to hospitals in Derry, Craigavon and Belfast, due to the situation at SWAH, faced having to get multiple different buses, such was the current provision of public transport in the area.
William, who worked in the sustainable transport industry for many years encouraging people to cycle and walk more, added, “The whole business of persuading people out of their cars, Translink do a great job of undermining that.”
When contacted by the Herald, Translink said it was carrying out an investigation into the situation with the bus Jenny and William had used in early December.
“All our services are exceptionally busy in the run up to Christmas. We are operating additional services on the route where possible to assist with capacity management and we will continue to do so in the lead up to Christmas and at other peak times,” said a spokeswoman. 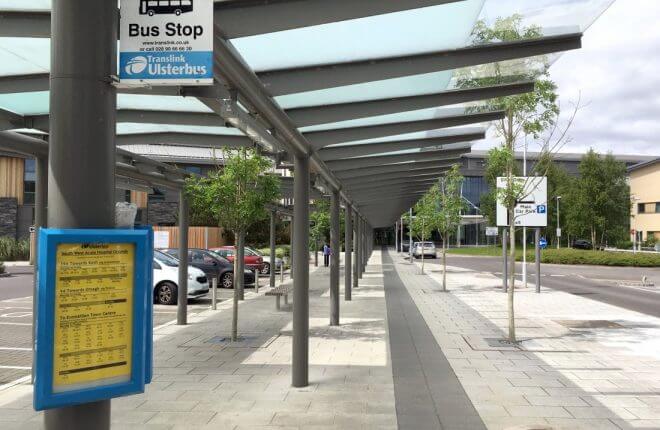 Bus service to hospital cut due to low demand

PATIENTS depending on public transport to get to South West Acute Hospital will suffer as Translink NI has confirmed...