Historical entertainer, Paddy Cullivan, will be showcasing Ireland’s own ‘JFK Moment’ at the Ardhowen Theatre with his one-man show, “The Murder of Michael Collins”.
As with the assassination of American President, John F. Kennedy in 1963, the death of Ireland’s first Commander-in-Chief, Michael Collins from a sniper’s bullet in 1922 has stirred much debate over the decades.
Cullivan presents the view that there was more to Collins’ death at Béal na mBlath than just an Irish Civil War ambush.
The show explores other factors that may have been behind the killing such as Collins’ intention to collapse the newly-formed statelet of Northern Ireland that had been drawn up post-partition in order to fully unite Ireland.
“The show is basically a kind of a hundred-minute rollercoaster ride through – what I consider to be – the murder of Michael Collins.
“It’s a controversial title,” says Cullivan, “but it is there because there was such a huge cover-up about it.
“Eight months into his reign as the most powerful man in Ireland who had negotiated the (Anglo-Irish) Treaty, Michael Collins died in an ambush with 25 bodyguards with him – none of whom die either.
“It’s a very strange story – it’s a very ‘JFK moment’. The weirdest thing about it is not what happens itself, but the aftermath.
“There’s no investigation, there’s no inquest and no enquiry. There’s an autopsy but it disappears and then he has no death certificate. It’s really strange – it’s almost like a ghost event that doesn’t happen. It’s all very odd.
“One of the reasons I think Collins was killed because he was planning an invasion of the North.
“He had a large army and he really wanted to help the Catholics in the North. I go into this in the show. In the South, Collins has been turned into a ‘mantelpiece martyr’ – he’s up there with Pope John Paul II.
“Given that his plan to collapse the Northern Irish state was quickly swept aside after his death, I believe this issue was a significant reason behind his death.
“I have 300 images in the show, there’s a couple of songs and actually there are comedic moments. Collins himself had a great sense of humour but the farcical nature of the news coverage at the time leads to appalling moments of dark humour.
“One of the farcical elements of the news reporting was him giving a monologue saying ‘forgive them’ and ‘bury me in Glasnevin with the boys’. Despite having a massive head wound from a bullet that killed him within a tenth of a second.
“The papers also reported that he kept firing back and encouraging his men after he had been mortally wounded. It just shows that ‘fake news’ is a hundred-year-old entity.”
Cullivan has a lot of material to convey to the audience in a 90-minute show, but the Covid lockdown period gave him ample time to structure his show accordingly to give a full account of what happened to Collins that day.
He added: “The lockdown time gave me the opportunity to read every book on this subject and put this show on.
“I tell the audience that I’ve read every book about this so you don’t have to – and after this show, you won’t want to.”
“The Murder of Michael Collins” is on at the Ardhowen Theatre, Enniskillen, on Friday, September 23 at 8pm. Tickets are £12 and can be bought online at: https://ardhowen.com/show/the-murder-of-michael-collins/ 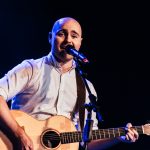 Paddy Raff to have Enniskillen in tears of laughter