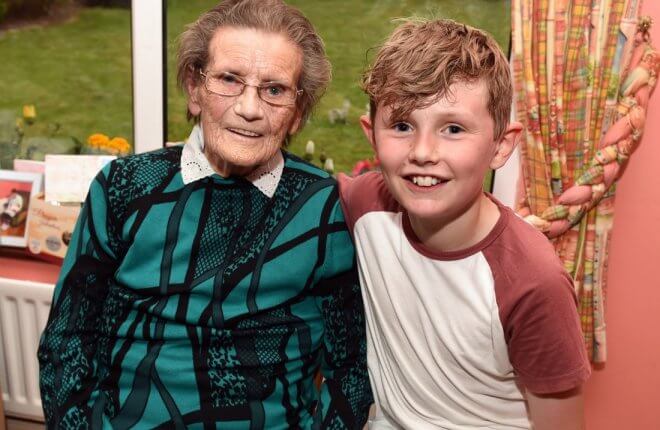 ROSLEA WOMAN Brigid Quigley has just celebrated her 100th birthday with family and friends.
The Greaghwarren woman was surrounded by sons, daughters and grandchildren as she opened cards and telegrams.
A relative of the Quigley brothers Seamus and Sean who helped Fermanagh reach the Ulster final on Sunday, Brigid was her second day of excitement having cheered them on against Monaghan on Sunday afternoon.
She’s hoping now she can watch the final at the end of this month as Fermanagh bid to bring the Ulster title back for the first time in their history.
Brigid put long life down to one simple thing, ‘sheer hard work’.
Brigid was married to Patrick, who died 36 years ago.
She worked for two doctors in the Roslea area after leaving school, cooking and cleaning.
She then travelled to Liverpool to work in a factory for several years before returning home to marry Patrick.
They settled in Greaghwarren began to farm, something they did for the rest of their lives.
The couple had five children, three boys, Paul, Gabriel and Kevin and two girls Carmel and Ann. Now Brigid has 41 grandchildren and great grandchildren.
On Monday she received a letter and cheque from the President Michael D. Higgins, as well as a telegram from Queen Elizabeth.