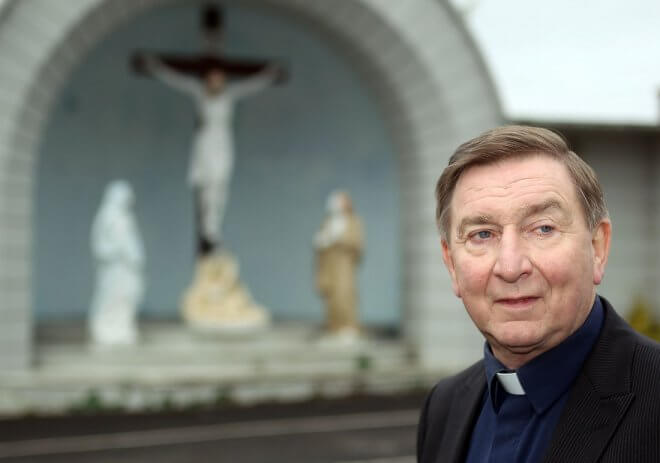 THE Herald’s Facebook page has been inundated with well-wishers posting their support for and thanks to arguably Fermanagh’s best-known churchman, Fr Brian D’Arcy, who is leaving his native county to take on a new position in Co Down.
In a moving and revealing interview with the Herald, the man who is known to millions through his radio slot on the Chris Evans’ Breakfast Show tells of his deep sense of sadness at leaving, after 16 years at The Graan Monastery in Enniskillen.
The popular Bellanaleck-born priest, who also has his own show on BBC Radio Ulster, talks candidly of his belief that this could be his last move. He says it’s the people of Fermanagh that he will miss most – and from all sections of the community.
The 72-year-old admits to having mixed feelings about his move and he says that one day he hopes to be laid to rest in Enniskillen where he has spent many years building bridges across the community divide.
The Fermanagh Herald Facebook page has been flooded with good wishes and gratitude from readers for the man who many have described as having a kind heart, a listening ear and above all being a source of great comfort in times of trouble.
Speaking ahead of his departure, he said: “You only get so many years in one place and my time in Enniskillen has been stretched out for as long as possible. I’m not fully prepared to leave Fermanagh and will be heartbroken to do so. I feel now like I don’t have a proper home any more.”
The author and broadcaster has spoken too of his pride for the people of Fermanagh and his hopes for the future of the region where he still feels there’s much more to be done.
“The people in the West are all very special but a forgotten group politically and not nearly forceful enough in saying that. They have worked hard to achieve a lot but there’s still not enough infrastructure in the area and it’s simply not fair that people are having to move away from Fermanagh to make a living. You see all these new roads being built across the North which is fantastic but we’re still struggling to build one bridge across Enniskillen that would solve all our problems and make it an incredible place.
“That’s what I’ve always tried to do in a spiritual sense by making a message of good news available to everyone and the people and clergy from all denominations responded incredibly. People tell me that I made a difference by saying what they think which has been just lovely.”
For full coverage of Fr Brian’s departure, see pages 10&11 of this weeks Fermanagh Herald.