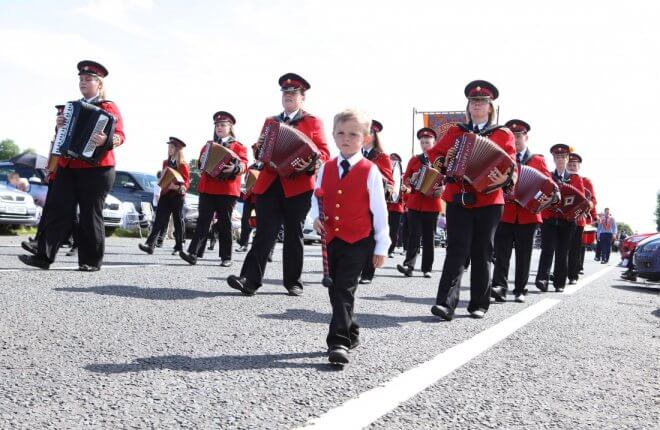 On parade at the Twelfth in Lisbellaw

The sun shone on Lisbellaw today as a crowd of over four thousand descended on the village for Fermanagh’s annual Twelfth of July celebrations.
Lisbellaw was one of 19 different locations across the North commemorating the Battle of the Boyne in 1690 and last hosted the event in 2009.
Blue skies and summer sunshine helped create a festival atmosphere with young and old  enjoying the colourful spectacle of pipes and drums parading through the village. This year’s local event drew an even bigger audience across the North and UK as it was broadcast live on the BBC.
The Co Fermanagh Twelfth is traditionally a cross-border event with lodges from Cavan, Donegal, Leitrim and Monaghan taking part. In all 90 Fermanagh lodges were joined by 20 from across the border alongside members of the Association of Loyal Orangewomen, the county’s five junior lodges and 70 bands, making it one of Ulster’s biggest parades.
The Fermanagh Grand Orange Lodge’s links with charities continues at each Twelfth of July celebration and this year’s chosen charity was the North West Mountain Rescue Team.
The platform proceedings and religious formalities were chaired by Co Fermanagh Grand Master Stuart Brooker who said he was “incredibly proud” by the smooth running of the event, which was moved forward by two hours to accommodate the television coverage.
“It is really encouraging to see everyone out enjoying this happy day and doing their bit,” he added.