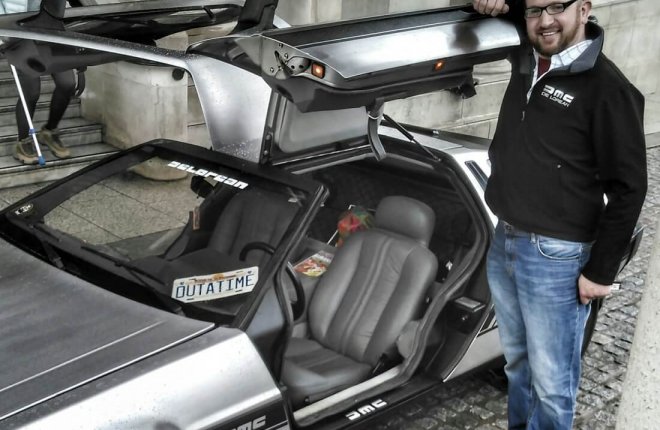 Stephen Armstrong with his DeLorean

A FERMANAGH man’s dream of driving “Back to the Future” came true recently when he rocked up to Castle Coole in his very own De Lorean.

Stephen Armstrong, who is originally from Ballycassidy but now lives in Lurgan, has been fascinated by the famous car ever since first watching the classic film when he was little boy.

In October 2015 Stephen realised his life-long ambition when he travelled to Edmonton in Alberta, Canada, the home place of Michael J Fox who played Marty McFly in the 1985 movie no less, and bought his very own “movie star on wheels”, as he put it.

“I’d seen it for sale online after dreaming of owning one and researching about them since I was seven,” said the 37-year-old, who said his dream was complete when he drove it back to Fermanagh for the first time earlier this month.

“I have dyslexia and I found having an interest in these cars helped me with my confidence. I never stopped believing I would own a DeLorean someday.”

Stephen has been putting his dream car to good use over the past couple of years. Last year, he brought it to the DeLorean Eurofest Convention, where owners from around the world gathered at the site of the old DeLorean factory in Dunmurry then drove in a convoy to Stormont.

On top of that, he also runs his own Facebook, Twitter and Instagram pages, called TIMELESS DeLorean Northern Ireland, and hires the car out for weddings, conventions, and other occasions.

“I still pinch myself that I own my very own stainless steel dream car,” added Stephen, who said the feeling driving around in it was unparalleled.

“The attention you get driving around in a DeLorean is great people would stop and stare pointing with a look of unbelief when they see a DeLorean.”