Advertisement
HomeHeadlineDay out in Rossnowlagh ends with sinking feeling…
Advertisement 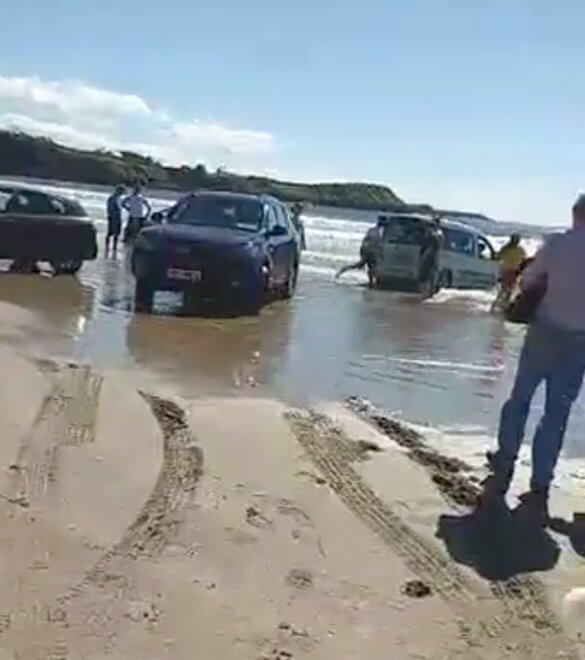 FRESH warnings have been made to daytrippers parking on Rossnowlagh beach after a number of motorists got into trouble again at the weekend.
A popular spot for Fermanagh day-trippers, many took advantage of Saturday’s fine weather to visit one of south Donegal’s busiest beaches. But for a number of car owners, it was a soggy and expensive end to the day when the incoming tide caught them unawares.
A video was taken by local woman Marie Doherty and viewed on Facebook thousands of times .
It showed stunned onlookers observing the six cars, including saloons and high end 4×4, left stuck in the sand with the waves crashing up against them.
“Every summer the cars end up washed up on Rossnowlagh beach. This has happened so many times in the past. Obviously the warnings each year are never listened to.
“There was plenty of room in the carpark but people still opt to park close to the water. Some action needs to be taken to stop them,” Marie said.
The incident is a regular occurrence as each year dozens of drivers get caught out by exceptionally high tides swamping their cars when they are left parked at the beach.
Rossnowlagh is one of only two beaches in the county that cars are allowed to drive on to but they could soon be banned from the sand under new proposals.
Last month a proposed shake up of Donegal County Council by-laws was mooted in a bid to stamp out the chaotic scenes witnessed every summer when thousands of people flock to the coastal village.
But James Garvey who runs Rossnowlagh Surf School wouldn’t be in favour of any car beach ban.
“It’s a crazy situation at busy times but the fact that people can drive right onto the beach is one of the things that makes Rossnowlagh so special.
“For visiting families a big attraction is the fact that they can load up their cars for the day and take them right onto the sand for a picnic or whatever. The problem is that people don’t always take enough care or ask the on-duty lifeguards about tide timings and that’s when they get caught out,” he told the Herald.