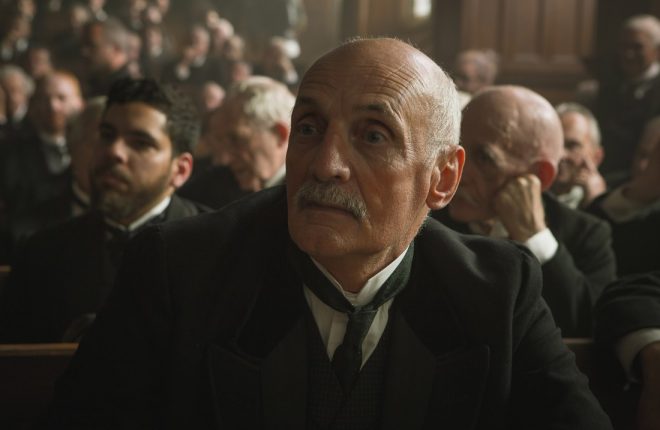 Mannix Magee is an extra in The Lost City of Z

FERMANAGH is well represented when Brad Pitt’s latest movie that hit the big screens this weekend, a film that brought together two local men who hadn’t seen each other in 20 years.
“The Lost City of Z” is an action adventure biopic about intrepid explorer Percy Fawcett and his quest to find an ancient lost city of the Amazon in the early 20th century. Shot between Belfast and South America, and produced by Brad Pitt’s own company, the film stars Charlie Hunnam, Robert Pattison and Sienna Miller – and Irvinestown man Mannix Magee.
Retired PE teacher Mannix, who is a prominent extra in a key scene, wasn’t even the only Fermanagh native on set, and was given a pleasant surprise when he spotted one of his former students among the crew, film stills photographer Aidan Monaghan from Ederney.
Aidan, who has been making a name for himself in the world of the silver screen working on photography for blockbuster films such as The Martian, recalled the happy reunion.
“There was filming taking place at Methodist College in Belfast and Mannix was there. Initially I didn’t notice him, then someone grabbed me from behind and said “how’s Aidan”. I hadn’t seen Mannix in about 20 years, but we remembered each other well,” said the former architect, who said he always had great fondness for his former teacher.
That fondness was reciprocated, with Mannix stating Aidan was “always a lovely lad” who he wasn’t surprised was doing so well for himself in the movie industry.
“I got as big a surprise when I saw him on set,” said Mannix. “I didn’t realise it was him. I’d seen this guy doing some still photographs of the set and so on, and then when we were inside I just caught his eye and realise, oh my God, that’s Aidan Monaghan. I knew him right away.”
Aidan explained the scene Mannix starred in involved a meeting of the National Geographic Society, and the film makers obviously saw the Irvinestown man’s potential.
“The scene involves quite a lot of elderly men,” he joked. “Mannix obviously made an impression because he’s in the front row.”
While Mannix himself joked that his scene “probably ended up on the cutting room floor”, it doesn’t appear to be the case, as he even makes an appearance in the trailer.
It’s the Irvinestown man’s first feature film, having signed up for an extras company when he retired, but he said he had great fun and would certainly do it again.
The Lost City of Z is currently in cinemas.

THOSE not from the Ederney and Irvinestown areas may not instantly recognise Aidan Monaghan’s face, but film fans around the world will certainly recognise his work.
From box-office smashes such as The Martian starring Matt Damon, to the 2014 hit High-Rise starring Tom Hiddleston, to critically acclaimed Philomena, and the Oscar-winning short film The Shore, as well as a range of theatre work, Aidan’s photos have been featured in the world’s top magazines and have graced walls and billboards across the globe as the promotional posters for the films.
The feeling of so many people viewing his work is one the Fermanagh man said he’ll never get used to.
“You never get used to the little buzz it gives you when you see a poster on the Tube or somewhere,” he said. “It’s really satisfying.”
Film photography is, in fact, the creative Ederney native’s second career, having first trained and worked as an architect, before the economic crash led  him back to following his first love of photography.
Advising others who may be thinking of taking that often scary step change in career, Aidan said “get paid to play.”
“Just drive at it,” he said. “Do the work, do it well and just try and keep on going until it begins to actually become what you do. Money will follow after that.”