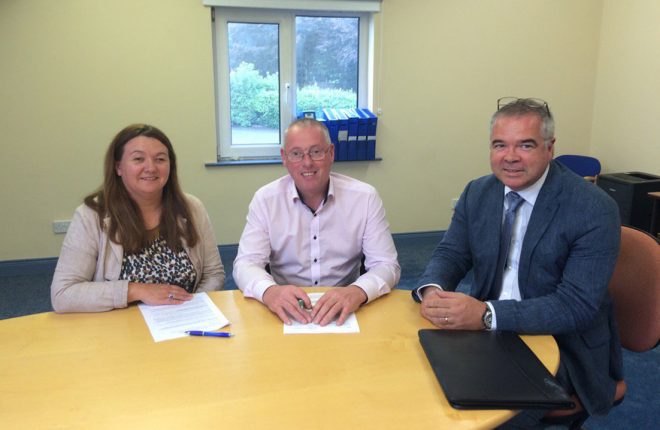 MLAs have held “positive discussions” with doctors on the future of GP services in Fermanagh amidst impending retirements of local GPs and problems with replacing them.
Sean Lynch, MLA for Fermanagh South Tyrone and his West Tyrone Assembly colleague Michaela Boyle, held a meeting with Dr Brendan O’Hare last week to discuss a range of issues facing GP surgeries, particularly those in Fermanagh. The meeting is one of a series that Mr Lynch and Sinn Fein members have been holding with GPs on the issue.
“I am very aware of the increasing demand on GP services and I am also acutely aware of the difficulties facing GP provision in Fermanagh,” he told the Herald.
“Dr O’Hare welcomed our meeting and was very positive with regard to the Health Minister’s response to date, describing Minister Michelle O’Neill as supportive and as someone who is clear and determined in resolving this crisis.
“Having spoken to the Minister for Health, I am confident Ms O’Neill is working hard to bring about the reforms required to resolve this issue and she is currently carefully considering recommendations from the recent GP-led Care Review.”
Last month, Ms O’Neill committed £900,000 in funding to rural GP services, which Mr Lynch says “will help broaden the skills mix in primary care as well as enhance capacity to meet growing patient demand”.
“Working together through federations will help GPs find new ways of working to address the challenges they face,” he added.
Dr O’Hare told the Herald this week: “Based on the discussions I have had with medical colleagues who have met with the Minister for Health and her Department, I believe that she and her officials now have a very clear understanding of the exceptional difficulties being faced in primary care. There is clearly a will there to work towards developing innovative solutions that in the medium term will resolve the problems that we have.”
Meanwhile it has been confirmed that a rural surgery in South Fermanagh that was facing an uncertain future has been given another reprieve with the help of local doctors. Roslea Medical Practice became vacant at the end of June following the departure of the long-term GP Dr Donal Collins. To ensure the provision of medical services in the area, a group of local GPs, working on behalf of Western Rural Healthcare, stepped in to fill the breach. The efforts to keep the rural practice open during the summer came two months after a similar move that saw a consortium of doctors take over Ederney surgery.
From July 1st until August 31st, GP telephone advice is being provided in the mornings in the event of an emergency while a doctor is available in the afternoons to see patients and sign prescriptions. It has since been confirmed that a new and separate consortium of local GPs will continue this service from September 1st onwards.