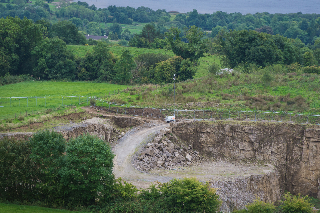 The quarry site where fracking was due to take place RMG03

THE Fermanagh Fracking Awareness Network (FFAN), which is campaigning against the extraction of gas in the Belcoo/Garrison area by ‘fracking’, this week repeated its fears that a quarry at Belcoo has been bought by the gas drilling company, Tamboran.

Last week, both the owners of the quarry, Acheson & Glover and Tamboran, denied that the quarry had changed hands.
However, a FFAN spokesman said it had been informed that Tamboran were in the process of either buying or re-leasing the quarry at Belcoo from its current owners.
The spokesman added: “We have been unable to confirm with certainty this process. However, if true, it is a very worrying development.

This development would mean that fracking in Fermanagh is in the process of being relaunched.”
She suggested that the issue was ‘above politics’ and asked that politicians of all parties ascertain as soon as possible the exact situation as to the above purchase/ re-lease of Belcoo quarry and inform the public of the facts.

“We would also ask them to act to stop the relaunching of the fracking industry in Fermanagh due to the severe health and environmental risks involved, and recognise that the issue of fracking is above normal political allegiances.

“As such it requires a cross-party response reflecting the wishes of the Fermanagh people who would prefer for our county to develop industries and jobs that are more viable, productive and sustainable than the ‘boom and bust’ fracking model.”