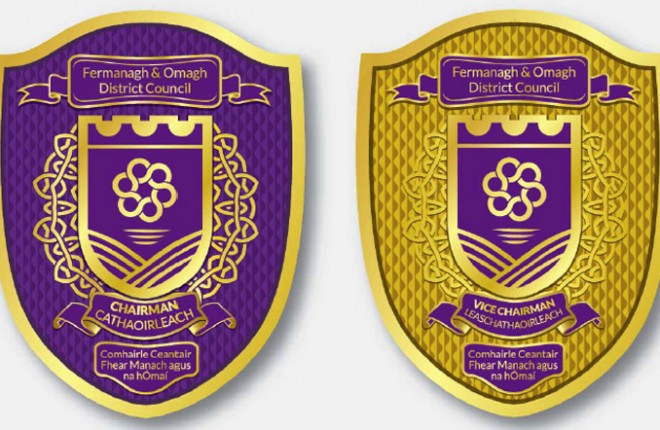 The final design of the new council chains has been approved

A FINAL design for the new Fermanagh and Omagh Council’s chain of office jewel has been officially decided.

Vaughtons, which is based in Birmingham, has been commissioned to make the new chains at an estimated cost of £7,995.

The final design – for the chairman of the council and the vice-chair – is a revised version of that by Creative Media which was originally agreed at a council meeting back in May.

Approval was given at this stage to proceed to get quotations from two specialist companies both of which had relevant experience in this field and had undertaken commissions for the legacy councils.

However neither company submitted a quotation, with each stating that due to other work commitments there was not enough time to prepare a submission in line with the relevant timescales.

It was therefore agreed at the July Group Party leaders’ meeting that an approach be made to Vaughtons, who had recently worked with the legacy councils, to ask them to consider a direct commission for the work.

Vaughtons agreed to undertake the commission for the work and subsequently submitted detailed designs for council consideration.

Director of corporate services and governance, Joan McCaffrey, explained how because of the complexities of the manufacturing process,

Vaughtons stated it is not possible to recreate the jewel exactly as originally agreed.

The designs submitted were presented to the Group Party leaders’ meeting on August 27 and put before full council on Tuesday evening, receiving full approval.

The new chains should be complete in approximately three months.