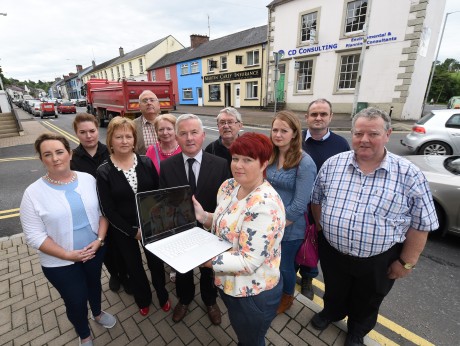 MAIN Street, Lisnaskea businesses say vital investment is being lost to the town centre due to the absence of a high speed, fibre optic broadband communications system.

An angry Nina Kelly-Kline, the sales and marketing manager of the Donn Carragh Hotel, speaking to the Herald, said that compared to Enniskillen, ‘Lisnaskea, is a Third World country’.

“You go into Enniskillen and you’ve got wi-fi on the main street, but we cannot get super fast broadband.”

Local businessman, Richard McPhillips collected a petition which he forwarded to the Department of Enterprise Trade and Industry.

He told the Herald the response he got back was not hopeful.

“It said it could be 2016 before it could be done, and we were advised that, at the end of the day, it would be best for us to use the voucher scheme, but this scheme is of no assistance whatsoever. I have pursued this with BT and, they have told me the fibre optic must be activated in the green cabinets before it can come to the premises.”

Mr McPhillips claimed there were ‘seven or eight’ unoccupied properties in main street whose owners have been approached towards letting them out.

“They have been asked about the availability of broadband and, when they answer in the negative, it turns people off straightaway. One man has had a major organisation willing to rent his property on a long-term basis.”

The scheme, operated by Fermanagh & Omagh District Council, provides vouchers of up to £3,000 for businesses, charities and social enterprises who meet the eligibility criteria, towards the installation of a Superfast broadband connection.

Nina Kelly-Kline explained that she looked after Leonard Auctioneers as well as the Donn Carragh hotel, and had come up against similar situations.

“We were letting out premises on the main street and the people were ready to walk into them, but the one thing they were asking for of fibre optic because they do an awful lot of video calling and conference calling.

“It’s putting off new business coming into the town. Our guests want fast broadband for, no matter where you go, you expect to get it. From what I’m told, it’s just a matter of flicking a switch.”

A spokesman for DETI stated: “While it is the case that not all premises within a specific postcode will benefit, DETI does  appreciate the disappointment and frustration this can cause.

“There are, however, other technology alternatives, including fixed-wireless and satellite technologies that can deliver acceptable services.

“It is untrue that the voucher scheme cannot operate until near-by cabinets have been fibre enabled. Indeed, it is the Department’s understanding that the vast majority of vouchers issued to date in Northern Ireland relate to a fixed wireless solution.”

Broadband is a wide bandwidth data transmission with an ability to simultaneously transport multiple signals and traffic types.