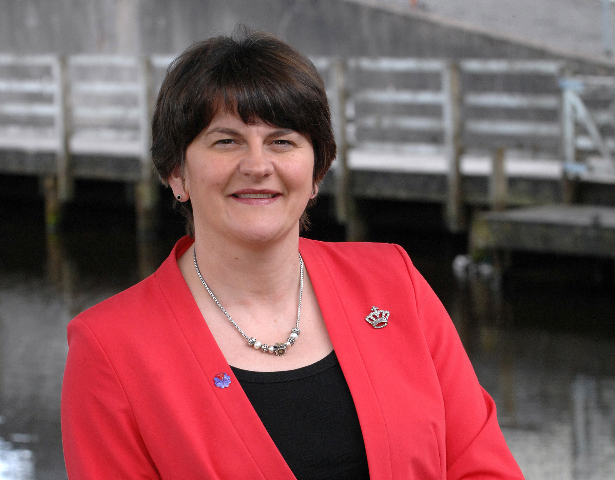 NEW Finance Minister Arlene Foster has admitted that she would be ‘happy’ to take on the role of First Minister – if the position were to become available.

Minister Foster was recently moved to head the North’s finance department, having served as DETI (Department of Enterprise, Trade and Investment) Minister.

And, following a recent health scare involving her DUP party leader and First Minister, Peter Robinson – speculation regarding whether the party leader would step down mounted.

When asked if the position were to become available, would it appeal to her, she responded:

“The position is filled and I’m delighted Peter is doing so well after his heart attack.

“Of course, I’m happy to serve the party wherever I can best use my skills and be most effective in representing my constituency and Northern Ireland at a local or international level.”

For now, though, the focus for the minister surrounds her current role as Finance Minister, a position she said she is ‘honoured’ by.

“I am very honoured Peter has chosen me as the first female Finance Minister in Northern Ireland.

“Having served in two former Ministerial roles that experience will undoubtedly be invaluable in my dealing with the budgetary pressures across other departments,” she said.

“When I became Finance Minister I knew about the financial challenges facing the Northern Ireland Executive but that didn’t make the job any easier.

“I would much rather have taken up the role when there was plenty of resources to go around and where the Executive would have the luxury of deciding what new services to introduce, rather than what services to cut.

“Unfortunately we can’t avoid the reality of a reduced budget.”

While being given the position is surely a vote of confidence from the party and its leader – and with the Welfare Reform debate set to take up much of her time in the immediate future – Minister Foster has sought to reassure constituents in Fermanagh that she will continue to work for them.

“Representing the people of Fermanagh and South Tyrone is a privilege and a priority for me and I will work tirelessly to ensure their voice is heard, irrespective of what role I undertake in the Assembly.

“When I was the Enterprise Minister I was very proud of what I delivered for the people of Fermanagh and South Tyrone.

“637 new jobs were created in the constituency last year, 2013/14 financial year, with further jobs announcements more recently at Webtech and Lakeland Trading Solutions in Enniskillen and GR White & Sons in Tempo. Earlier this year the £250million Gas to the West Scheme was announced, which will bring gas to Enniskillen, Derrylin, Omagh, Dungannon, Coalisland, Cookstown and Magherafelt,” she added.