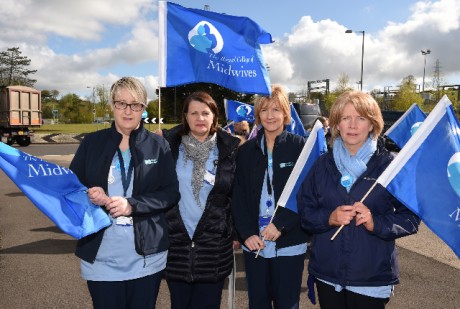 The Royal College of Midwives haven’t striked in 134 years until Thursday 30th April. Pictured on strike at the South West Acute Hospital in Enniskillen are, from left, Claudine Maguire, Mary Reihill, Tracey McEvoy and Nora Cadden

MIDWIVES in Enniskillen say they will continue with their strike campaign over a one per cent pay rise until the Stormont Executive approves the recommended pay increase.

The Royal College of Midwives’ (RCM) local union steward, Brenda McCabe made the comments after their first strike in its 133-year history.

During the industrial action around a dozen midwives took to the picket line at South West Acute Hospital on Thursday morning for the four hour walk-out.

The strike was sparked after the Northern Ireland Executive failed to give local midwives a recommended 1% per cent rise which has been awarded to midwives in England, Scotland and Wales.

Further action has been planned over today (Wednesday) and tomorrow while RCM members will only work the hours they are paid for.

The 38-year-old community midwife from Lisnaskea, said that all mothers were safe during the strike action which they “felt forced into doing”.

She explained: “We were in rotation during the strike ensuring that the ward was covered and that the services continued for mothers and babies. Some girls came out to show their support and the public was fantastic, they were beeping away. We feel we were forced to do this as England and Wales did the same and got their recommended 1 per cent and Scotland automatically got it. We were hopeful we wouldn’t have to strike but unfortunately the Northern Ireland Executive rejected the recommendation made by the NHS pay reviewer but there’s been no noise to see if the action of strike has made any impact.”

No babies were born during the four hour walk-out at the South West Acute Hospital while mothers-to-be were told there was a safe number of staff attending the wards.
The community midwife said that they feel “undervalued and demoralised”.

“A lot of our time goes unpaid,” she explained.

“Even from the picket line we were thinking about the ward and weren’t really switching off. That’s typical of a midwife. I’m a community midwife and work from 9 until 5 but I don’t go home and switch off, I’ll sometimes text my mummies to see if they are OK and do all that work outside of hours because it’s in us.

“The campaign continues until we get an answer. We will present what overtime is expected of us and see if that has any impact on the realisation that this is the actual amount of hours we give that is unpaid. 1 per cent is a small, small amount in comparison to that. They have to pay us that overtime which will be a lot more expensive.

“A lot of midwives have been telling their own stories about the financial hardship they have been under and the impact it is having on their lives. So we want to say that enough is enough and we want to fee valued and appreciated for the work we do.”