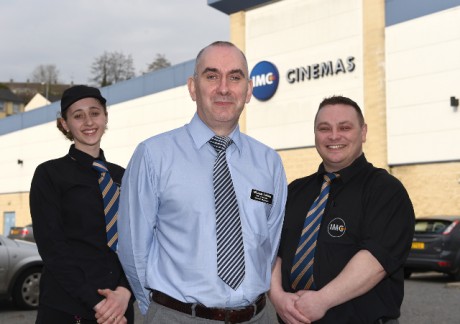 IN THE 24 years that Michael Collins has worked in the cinema industry, as manager at the cinema at Bowler Vision in Enniskillen, and later at Omniplex (now IMC) at the same site, he has witnessed a plethora of changes.

From the advent of piracy, and indeed the internet – as well as the economic downturn, one would be forgiven for thinking that it’s a difficult climate for the Enniskillen cinema to operate in.

But, as manager Michael Collins testifies: The cinema has seen a year on year increase in profits, and shows no signs of slowing down. Indeed, the Maguiresbridge man hinted that the cinema could be in line for further investment, having taken on the IMC banner back in September of 2014.

“I think things at present are stable. It’s a stable industry at the moment – the customers work hard all week,” Mr Collins explained, “The demands on the general public with their own work is quite pressurised and obviously in the last ten years they have had a lot of changes in their disposable income and how they decide where they want it to go.

“And it’s up to us then to adapt to that. We have grown in business since opening in 2000, we have increased business year in, year out with the customer number coming in the door. But our aim here is to try to adapt each year and just because we did something one way last year doesn’t mean we’ll necessarily do it in the next year.”

In the past few years, Mr Collins pinpointed the growth of the family market – and nodded towards senior citizens as the next potential growth spurt. The directors are also keen to push non-blockbuster films, which, in order to succeed requires the support of the cinema-goer.

“The more customers that do go to those means the more movies we can get in. If you were to get six non-blockbuster movies and you lost on them, then the will to bring in movies that are not mainstream becomes lesser.”

On the pirating of films, and the availability of such online, Mr Collins said that the cinema has held its own.

“If we have continued to grow the number over the years, and since 2000, if we’re continuing to grow the customers numbers in the door – I’m not saying it hasn’t affected us – but I’m aware from following that particular issue that it’s an ongoing problem for the cinema industry.

“It hasn’t affected us say as much as the fall of the DVD stores or the movie rental business which has disappeared from the high street.”

And while the so-called blockbuster films remain vitally important to viewing figures, in recent times, Mr Collins also said that customers know now more than ever what they are getting for their money.

“The bottom line is the general public are very well educated in relation to what’s good and bad, they follow the reviews online.

“The customer is very intelligent in what they want to see.”

And while the seven screen cinema remains relatively new, and recently underwent a shift from 35mm film lense to full digital – Mr Collins indicated that investment could be made in the not-so-distant future.