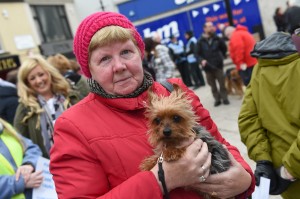 BEST OF FRIENDS…Eileen Ford with Dolly at the protest.

By Gareth McKeown
ON MONDAY CONCERNED animal lovers took to the Diamond in Enniskillen to protest against Furnish Kennels in Clabby. Following a BBC documentary, which featured the kennels and conditions described as ‘appalling’ and ‘barbaric’ the business has been subjected to a barrage of criticism.

On Friday 17 April the premises received a bomb threat, while the following evening a deliberate fire claimed the lives of 13 Yorkshire Terriers.

On Monday morning supporters of the ‘Close down Furnish Kennels’ puppy farm Fivemiletown’ Facebook group gathered at the Diamond to make their opposition known.

The founder of the group then met with Fermanagh and Omagh District Council chief executive Brendan Hegarty, where she handed over a petition with 12,000 signatures calling for the closure of the dog breeding operation.

This will be presented at the meeting of the Environmental Services Committee next Wednesday, May 5.

The founder of the Facebook group – who did not want to be identified – said she was delighted with the turnout and estimated there was somewhere between 50 and 60 people in attendance, along with many dogs.

“People were just really in support of it and everyone was united. There was nothing nasty, people were just passionate, with everyone hoping for the same outcome.”
The owner of Furnish Kennels, David Hamilton has previously told the Herald that conditions at the kennels are safe and that the business complies with regulations.