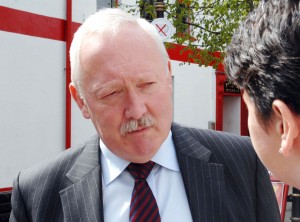 By Ryan Smith
A UNIONIST politician can win the 2015 Westminster election – but only if a single unionist is chosen.

That’s the view of 2010’s beaten single unionist candidate Rodney Connor, who after a court ruling, lost out to current MP Michelle Gildernew by just a single vote. He was speaking prior to the announcement that the DUP would support the UUP’s Tom Elliott in the upcoming election.

Back then, with the backing of both the DUP and UUP (who had a coalition agreement with the Tories) – he came within inches of securing the seat.

“First of all I really enjoyed the experience of standing for election in 2010. I felt very strongly – and still do – that the people of Fermanagh South Tyrone deserve and indeed need representation at Westminster,” he told the Fermanagh Herald.

“My objective was to have representation at Westminster and in order to do that you’ve got to do whatever you can to make sure that whoever you elect is going to take their seat at Westminster.

“Sinn Fein will not do that so therefore you must have some kind of an arrangement, call it what you want, to make sure that someone is going to win the election to represent the people of this area and do what needs to be done to improve the lives of people in this area.”

A particular bug bearer five years on for the 63-year-old is those who ‘spoiled’ their vote on the day.

“The one particular aspect that did hurt me was at the count, to see the number of ballot papers that had been spoilt by voters who had just scribbled TUV on their ballot paper.

“In doing that they spoilt their vote. Rather than vote for me they preferred to have Sinn Fein elected.

“And in doing that they were enabling Sinn Fein to win the election.”

Looking ahead to the May 7 election, Mr Connor said that he still kept a close eye on local politics. At present, current MP Michelle Gildernew, Sinn Fein, is to stand, as is the SDLP’s John Coyle and the Green Party’s Tanya Jones.

A newcomer to the race, Hannah Su, is to stand for the Alliance Party.

A single unionist candidate, where the parties work together, is the only way in which Fermanagh can ‘gain representation in Westminster’, according to Mr Connor.

“I feel that my efforts had achieved one very positive outcome.

“And that is with everybody working together, and as many people as possible voting and using their vote responsibly, then the people of Fermanagh and South Tyrone can and will have representation at Westminster.

“That was my objective. Hopefully this time we will have.”

He was surprised, at the time of speaking, that a candidate had not yet been chosen by the main unionist parties.

“Surely they will see. I don’t know what goes on inside political parties. I’m not privy to that nor do I want to be, but I do feel passionately still that we need to have representation and that can only be done by people working together. Surely everyone can see that.”

Now working on his farm and living between Brookeborough and Fivemiletown, Mr Connor, who turns 64 in two weeks was adamant that the single unionist candidate would not be him this time around.

“A very short answer ‘No’ – I really enjoyed the experience but I think I’ll leave it to the politicians now.”