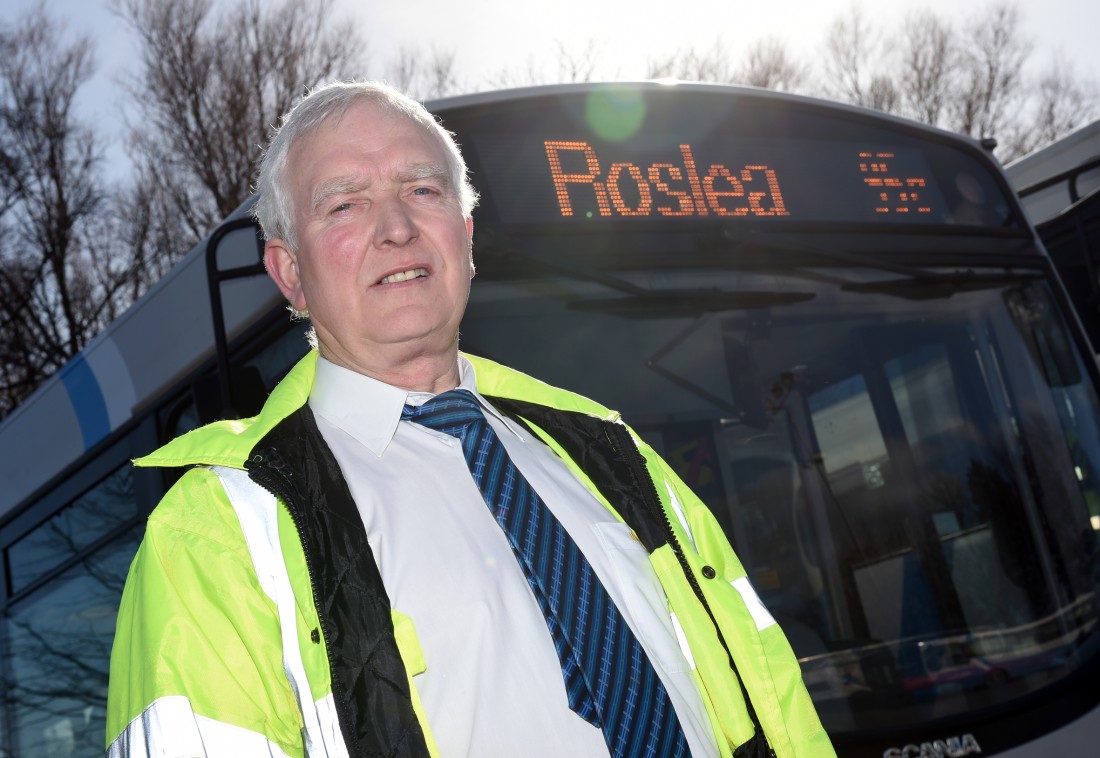 Cennie Keown, an Ulsterbus Inspector, stands beside a bus that is bound for Roslea. Soon this route may be no longer be available

THE ENTIRE ENNISKILLEN TOWN bus service could cease as early as next month according to information received by a local trade union.

The union UNITE has received a document from Translink detailing proposed cuts to bus services throughout the North, with the three Enniskillen town centre bus routes  facing the chop, alongside the Enniskillen Roslea service (95C) and the piloted Enniskillen to Altnagelvin Area Hospital route (294).

In the Department for Regional Development draft budget for 2015/2016, currently out for consultation, Translink has indicated that  further savings  may have to be made due to a reduction in budget of £15m on the previous year.

“A £15 million reduction in funding would inevitably lead to a combination of increased fares and reductions in, and the cessation of, some bus services. Service reductions would be expected to focus on the least profitable routes, including complete withdrawal of town services from a number of towns and a reduction in the frequency of other bus and rail services.”
Local trade unionist and UNITE Press and Campaigns spokesman Donal O’Cofaigh said the proposed cuts will impact on those most vulnerable in the community.
“It’s a false economy and as such it will push more people into cars and that will cause congestion. It will also affect people’s access to local shops and impact traders, so the small businesses will pay the price.”

Mr O’Cofaigh also highlighted the impact on those who use the bus service to access the hospital.
“This will hit families with children, it will hit older people and it will hit the poor. So again the vulnerable are paying the price for a crisis they didn’t cause.”

Davy McMurray, Unite’s regional officer responsible for transport said the cuts to bus services in the county would ‘decimate local towns’. He has called on local rural MLAs to ‘step up to the mark’
Local Sinn Fein MLA Phil Flanagan said he was ‘dismayed’ at the Translink approach.

“The town centre route is underused at present and the rationale for that is the current route it takes. I have pointed this out to Translink and have provided them with an alternative route, which would be more attractive to passengers and would attract greater numbers of people using the service. At present, the town centre route does not offer a round trip and as a result other options are more attractive to passengers.

“If Translink were to adopt my alternative proposal, I am confident that greater numbers of people would use the service and it could be retained.”

A Translink spokesman said: “As a consequence of the reduction in government funding of 2015/16 Translink is considering measures that would need to be taken to adapt to these cuts and their associated impact.

“As part of this, we are currently reviewing how we can best design our network to work within our allocated resources while protecting the routes most important to our customers.

“No decisions have been taken at this stage over 2015/16 service efficiencies and we will engage with local stakeholders should any local service changes be proposed.”