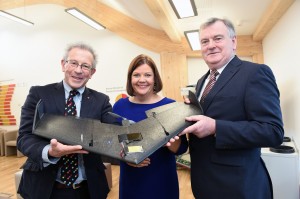 THE STATE-OF-THE-ART £1.5m CREST Centre has been launched, offering specialist education, training and support to industry in the field of Renewable Energy and Sustainable Technologies.

A large crowd attended the South West College Skills’ Centre, the location of the new facility last week where guest of honour was Chris Hines MBE, the former Sustainability Director at the Eden Project in Cornwall.

Led by South West College, CREST operates across a network of educational institutions including Cavan Innovation and Technology Centre, Sligo Institute of Technology and Dumfries and Galloway College in Scotland.

The centre, the biggest of its kind in Ireland, not only provides skills and training for students, but offers vital R&D support to help small and medium-sized firms compete in the multi-billion pound renewable energy and sustainable technologies sector.

“It is a great coup for us, because we want to develop Enniskillen as our main centre in those specialist areas.”

He continued: “It’s a big part of our aim to create a rural university base for this area and to encourage part-time education, higher-level education.”

Jill Cush, Manager of the Business Innovation Centre at South West College explained the overall aim of the centre is to provide support to industry.

“There’s a recognition that small businesses aren’t availing of the opportunities available in renewable energy and sustainable technologies and they really don’t how to make money. They know there are opportunities, but don’t know how to realise it.”

She continued: “The aim is to bring the very latest R&D ideas to this region so that people are exposed to that and this is a centre where that will happen. It’s about stimulating the economy and the role the college plays in shaping the economy so inevitably there will be more smaller companies, there will be more technical jobs, more jobs in the first instance, but also better jobs; higher paid jobs.

She added: “In terms of the lifetime and the number of the projects that will flow through CREST we would anticipate the centre would pay for itself many times over.”

Chris Hines, who worked at the Eden Project for five and a half years, described the CREST centre as a ‘beacon of hope’.

“I think it will inspire people to think they can make a change so they can hopefully get a job in the renewable industry or the sustainable industries and those are the biggest growth areas for the 21st century, that’s going to be where the jobs are.”