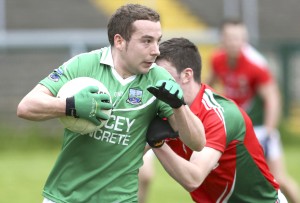 Daniel Kille has been showing some decent pre-season form.

Fermanagh played two challenge matches last week with a win and a defeat the return as McKenna Cup preparation continued.

The win came in the first of the two fixtures, a fairly comprehensive victory over Leitrim at Kinawley while the defeat came on Wednesday last at Emyvale, Monaghan scoring a one goal victory.

The clash with the Connacht men saw Fermanagh dominate in testing conditions. A goal in the first half got them on their way and over the course of the tie the attack ran up 15 points.

Leading the scoring charge was Daniel Kille with other scores supplied by team captain Ryan Jones and Barry Mulrone.

Wednesday nights tussle in Emyvale was a much sterner examination for Fermanagh, but they acquitted themselves well and in the end it was a narrow enough winning margin for Malachy O’Rourke’s side, 2-9 to 1-9.

Fermanagh opened the game quite brightly and pushed out into the lead with a handful of early points, Sean Quigley to the fore, but towards the break the home side gained an edge and they snapped up two opportunist goals that hoisted them into a four point interval lead of 2-2 to 0-4.

Those two goals in the end were to prove decisive. Over the second half Fermanagh made strenuous efforts to haul themselves back and they posed considerable problems for the home side, manager O’Rourke deeming it necessary to introduce some of his more experienced personnel to get them over the line.

Darren Hughes was one whose arrival made an impact on the exchanges. Fermanagh however kept themselves well in range with points from Sean Quigley, Marty O’Brien and Paul McCusker.

McCusker’s goal came midway through the half as he got on the end of neat build up. That left just a point separating the sides. But that was as good as it got for Fermanagh with the physical presence of Hughes giving Monaghan a late drive.

For Fermanagh Martin O’Brien and Ryan McCluskey were especially solid in defence with Ruairi Corrigan, Ciaran Flaherty and Sean Quigley impressive in attack.

Over the two games there would have been encouragement for the Erne team management with the promising efforts delivered by new boys, James Allen, James McMahon and Thomas McCaffery in particular.

Reports from the team camp have been positive with excellent attendance at training, team morale at a high level and an enthusiastic approach from all concerned as they head into the New Year.

The squad now have a break over the festive period with the first competitive game of the 2015 campaign, the opening McKenna Cup meeting with St Mary’s College at Brewster Park on Sunday January 3rd.