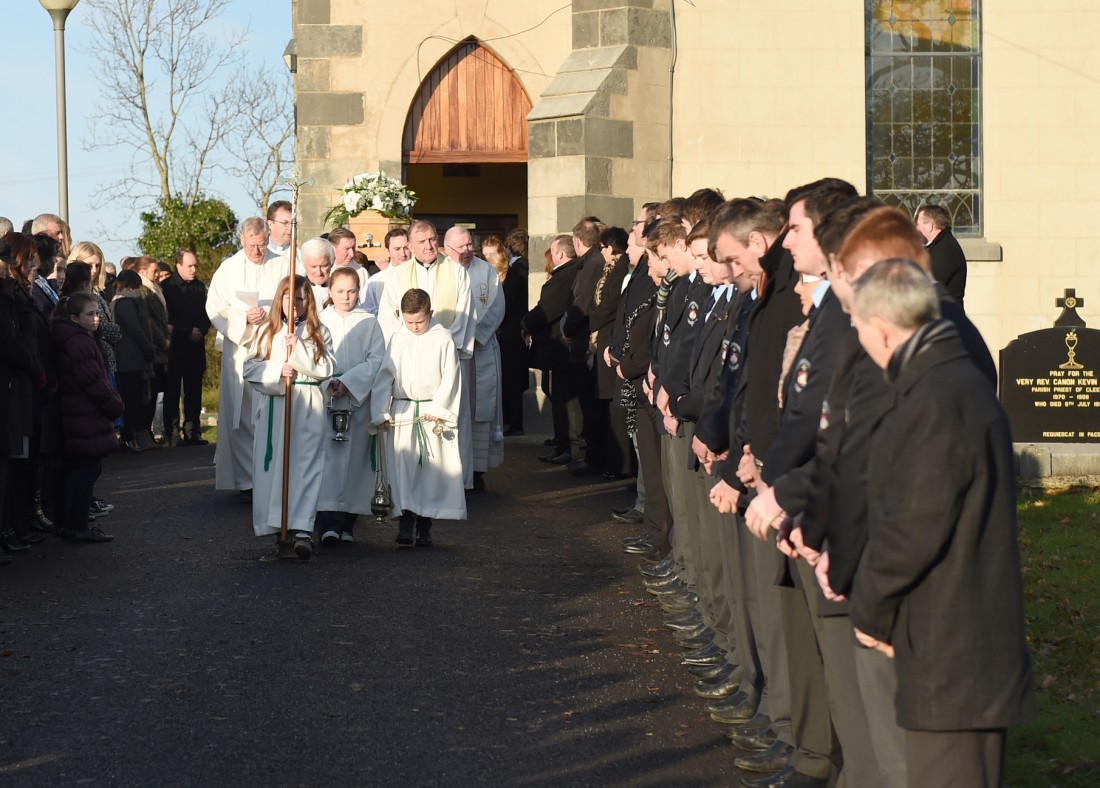 Daniel Morris’ remains are carried past a guard of honour formed by staff and students from St Michael’s College, Enniskillen.

THOUSANDS gathered at St Mary’s Church, Arney, on Monday, for the funeral mass of father-of-four Daniel Morris, who died following a one vehicle crash on Boxing Day.

The 37-year-old had been driving on the main A4 from Fivemiletown to Brookeborough shortly before 8am on December 26, when it is thought his car may  have struck black ice.

The crash took place around two miles outside of Fivemiletown. He was driving a silver Audi when, it is understood, he lost control of the car which went off the road and went backwards into a fence.

A police spokesman confirmed that the crash took place ‘just before 8am’, and they are appealing for witnesses.

Sinn Fein MLA Michelle Gildernew, who knew the family, described Daniel as ‘highly respected by everyone who knew him’.

“This is a terrible tragedy and has shocked the local community. It is all the more tragic coming so soon after Christmas.

“I knew Dan Morris and his family personally and was shocked and saddened to hear of his death. He had recently moved to Brookeborough from Enniskillen and I’m sure the communities in both towns will rally round to support the Morris and O’Connor families at this difficult time.”

The funeral Mass on Monday was said by Fr Brian D’Arcy, along with seven other priests. A number of guards of honour were present, including from St Michael’s College; Belnaleck Art McMorrows; representatives from Glasgow Celtic football club, including some who had travelled from Scotland; St Michael’s scout band; and St Michael’s scout unit.

The hall was, afterwards, packed with friends and family paying their respects.
Daniel was a past pupil of St Michael’s Primary School, St Michael’s College, and Liverpool John Moore’s University.

He returned to the county to practice law in the family firm.

Daniel is survived by his mother Eleanor and older brother Sean, and pre-deceased by his father, Louis. He is also survived by his wife, Aine, and four children: Michael, Ciaran, Eoin and Oisin.
The family had moved to Brookeborough three months ago from Enniskillen.

UUP Councillor Victor Warrington lives in the area where the crash took place. He said it is the third fatal crash to take place on within a mile on that road.

“I want to pass my condolences to the family at this sad time, especially at Christmas. That is the third fatality in thirteen months within a mile,” he said.

“There was one in November last year, Eileen Maguire from Lisnarick, Richard Browne in April who I knew very well.

“It’s not that it’s a bad road, the Roads Service did put an extra lane in there, which was a good help, but unfortunately it is still obviously dangerous.”

A police spokesman said that police are appealing for witnesses to the crash.

“Daniel was the driver of a silver Audi car involved in a one vehicle collision on the Belfast Road between Fivemiletown and Brookeborough just before 8am this morning,” a spokesman said.

“I am appealing for anyone who witnessed the collision or anyone who has any information to assist police with our enquiries to contact officers at the Collision Investigation Unit in Steeple on 101.”