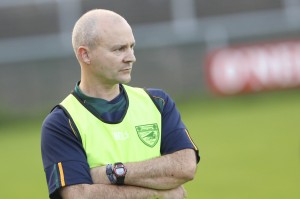 The dusk is starting to creep upon St Oliver Plunkett’s park, but the Derrylin faithful are oblivious. They are massed on the pitch celebrating a memorable victory with their triumphant heroes.

There among them is Derrylin boss Mickey Cadden, almost overwhelmed by the magnitude of what the O’Connell’s have just accomplished.

“Just amazing, for a small village in the back end of Fermanagh coming up here and make the noise they did in the middle of Armagh in their home territory,” said Cadden. “This team showed great resolve. When we were a point down with only seconds to go and to come up the field and get the point to go into extra-time and then really soak St Paul’s up after that. Some of these boys are 17, 18, 19 years of age, they have become men today. It’s monumental.”

Coming up to the game Cadden had looked for honesty, he had looked for hard work. He wanted men to looking inside themselves and see what they could bring forward to the team. His men delivered in spades.

“Jesus, what an effort these boys have put in this year,” said Cadden. “115 times we’ve been out together this year between matches and training . These boys are unbelievable, how they were ever bottom of the third division is beyond me. What a team.

“There’s no individuals out there, I can’t name any individual. That there is what you would call a team performance. How many black cards did we have, how many subs did we make? This squad just speaks for itself.

“Our centre half back, Kevin McCusker was man of the match in the final in Fermanagh. We haven’t had him this three weeks and hopefully we get him back now for the next round. But, Jesus, the resolve of Micheal Shannon whose been playing in the middle of the field all year to go back into centre half back and play your man Murnin off the field, as far I was concerned, who was man of the match between St Paul’s and the Grange whenever we went up to watch them [in the Armagh final]. We made this team [St Paul’s] look average enough I thought, for a team that was bottom of division three, but what an effort.

Another man who came in for praise was Cadden’s young captain, Louis Leonard, 20 years of age, still under 21, but playing a captain’s role. And what about his rookie midfielder, Paddy Dolan?

“He’s 19 years of age and came in today for his first game in the whole senior run, even in Fermanagh. To come in today to step into middle of the field in the first round of the Ulster championship, my God boys! This man! Words fail me to describe this team.”

But even in this glorious moment Cadden can reflects on the loss that has helped bring them this far. He shows us a slim band on his wrist. Green and orange with the simple text ‘Believe’. Derrylin are wearing the band in memory of young Caolan Winterson who passed earlier this year.

“What better way to show belief,” said Cadden. “Down a point and looking like going out of the Ulster championship, to turn it around to get into extra time and then take control in extra time.”

Now though, the sights swing on Monaghan champions Inniskeen and the Ulster semi-final.

That’s our next plan and we’ll get back to work again and see what we have,” said Cadden. “I could never ask more of them after that today, but I’m going to, as usual, and they’ll give it, they give me it every time. To be playing football at this time of the year is a big, big, big bonus for us.