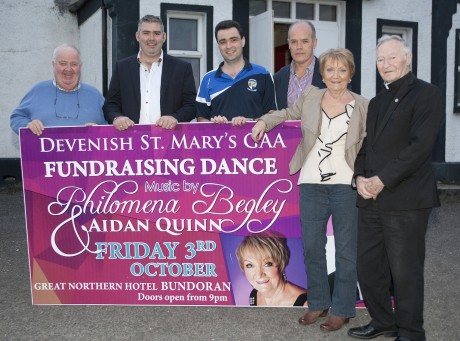 Devenish GAA will go ‘down memory lane’ this Friday night (3 October) when they welcome the return of the Queen of Country Philomena Begley to a special fundraising dance in the Great Northern Hotel in Bundoran.

More than 50 years on from the singer first performed in Garrison, Philomena returned to the village this week where she met up with Canon Lonergan, Devenish GAA Honorary Club President and the man who was instrumental in the success of dancing in St Mary’s Hall from the early sixties on.

Recalling those memorable nights, Canon Lonergan said: ‘I remember Philomena and The Old Cross Ceili Band coming to Garrison in the early sixties and I remember how popular she was. People would come from all over to hear Philomena and dance the night away. I would record the music that she played on the night on cassettes and when the night was finished I would go back to the house and play the cassettes over and over again until the small hours. I think it is fantastic that Philomena and her son Aidan will be playing and I’m looking forward to a great night in the Great Northern.’

It’s a dance Philomena is looking forward to and a night when she hopes to meet old friends: ‘When I think of Garrison I think of all the Christmas nights I played here in St Mary’s Hall with the band and I also think of Fr Lonergan as he was known then. I remember there was a small lady (Sarah Magee) running the mineral bar and I recall people could get tea and scones as well.

‘The hall hasn’t changed from what I remember of it. It was halls like St Mary’s in Garrison where I started all those years ago and I am delighted that Devenish GAA has brought me back along with Aidan to this part of the world for a dance. I am delighted to have got a chance to look around the hall and am absolutely delighted to have had a chance to have a chat with Canon Lonergan – he is looking better than ever. I am looking forward to playing for Devenish in the Great Northern and am hoping a big crowd turns out and that I perhaps run into a few old friends.’

Tickets to see Philomena Begley and her son Aidan Quinn are priced £12/€15 and are available from anyone involved with the Devenish club. Patrons can also pay at the doors on Friday which open at 9pm with dancing starting at 10pm.

Speaking ahead of the event, Kevin Coyle, Devenish GAA Club Treasurer said: ‘This will be special occasion for the community as Philomena was a popular visitor to Garrison.

We are looking forward to welcoming people from near and far to enjoy a night of reminiscing and dancing while also helping to raise much needed funds for our club.’