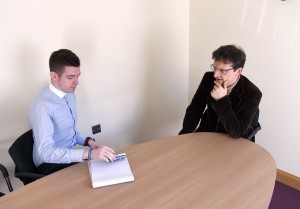 A CAMPAIGN to get farmers to pledge ‘not on my land’ is the latest move by anti-fracking group Belcoo to oppose Fracking in Fermanagh.

Belcoo Frack Free are working on a ‘Lock the Gate’ campaign which involves seeking out landowners, farmers, and encouraging them to sign up to say that they won’t allow fracking on their site.

The group feels that this will severely impact the commercial viability of fracking here.

Speaking to the Fermanagh Herald, leading anti-fracking campaigner Donal O’Cofaigh said that while a great victory has been won by campaigners after the environment minister delayed a fracking test drill near Belcoo, the fight is not yet over.

His comments come after Environment Minister Mark H Durkan turned down a proposal by Tamboran to drill an exploratory bore hole at a quarry near Belcoo under permitted development rights.

This means that the company’s plans have been, at least temporarily, halted. Options for Tamboran include seeking a judicial review of the decision, apply for full planning permission for the Belcoo site, which could take up to a year, or they may seek to apply to drill in another area.

Mr O’Cofaigh, press officer for Belcoo Frack Free, who also stood unsuccessfully as an anti-fracking candidate in the local elections back in May, praised the work of campaigners since Tamboran moved on site back on July 21.

“When Tamboran came in, they erected the razor wire fence, they had guard dogs, the security guys – the community was very angered. There was also a fear and I think it emboldened people to actually get involved and we had that protest that same day on the Monday,” Mr O’Cofaigh explained.

The decision from the Environment Minister came on Monday last, August 11, and it was met with jubilation from those opposed to fracking.

The official line remains ‘the company is currently reviewing its position’.

Mr O’Cofaigh, however, urges caution on the part of the anti-frackers.

“I feel it is important at this stage to say that this campaign hasn’t stopped, that there are a lot of options on the table for Tamboran. That we need to continue to organise and stay involved.”

He concluded: “Obviously there’s a lot of options on the table for them (Tamboran). I can’t presume to anticipate their next move, all I can work on is on the basis that they won’t give up.

“I hope that they do, I hope they see the way things are moving and see the strength of opposition on the ground – but we can’t assume that they’re going to stop.

“All this decision has bought us is time and it’s time to organise as far as I’m concerned.”