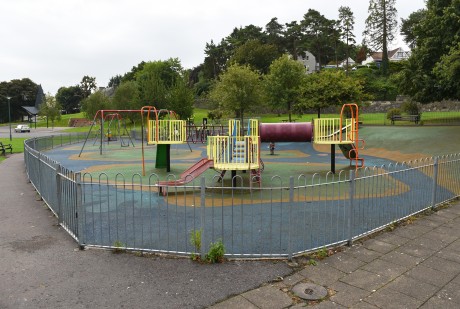 The Round O in Enniskillen where a teenager was recently stabbed

A 15-year-old boy has been refused bail after appearing before Fermanagh court in connection with the stabbing of a 14-year-old boy in the Round ‘O’ playpark in Enniskillen.

The teenager was stabbed twice in the stomach with a knife according to police.

Police confirmed the report of the attack as having been received at 11.50pm on Sunday night (August 24) at the Round ‘O’ play park in Enniskillen.

A police spokesman said: “Shortly before midnight, it was reported that two youths were approached by an unknown male in the area. It is believed the man stabbed the youth twice in the abdomen.

“The youth was taken to a nearby hospital for treatment to his injuries that are not believed to be life threatening.”

The male involved in the attacked was described as wearing a blue/navy hooded top and black tracksuit bottoms.

A resident in the area, who lives in one of the adjoining estates described a real ‘shock’ after the attack – and said that the attack could put a fear into parents who send their children to play at the park.

The resident, who didn’t wish to be named, said that she regularly walks in the park, often quite late at night, however was feeling ill and didn’t venture out on the night of the attack.

She said: “It’s very strange for something like this to happen. The Round ‘O’ is a place where people go and bring their children and I think that parents would be reluctant to send their children there now after that.

The Sinn Fein councillor added: “This is not the type of publicity that Enniskillen needs. We promote ourselves as a friendly, welcoming town. I would call on anyone with any information to contact the PSNI.

“The knife crime dimension adds an element to it that we don’t want.”

And, UUP MLA, Tom Elliott, also expressed his condemnation. He described it as a ‘cowardly attack’.

“It is a disturbing turn of events, that such attacks are taking place in public parks.

“I would appeal to anyone who may have information about this attack to contact the police, so the perpetrator can be brought to justice.

“My thoughts are with the young boy who was attacked, and I wish him a speedy recovery. The people of Enniskillen should not have to deal with cowardly attacks like this.”