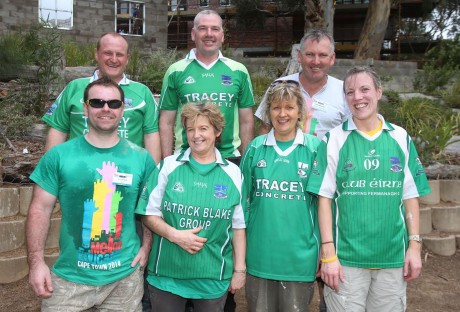 A GROUP of Fermanagh volunteers have made a real difference in a small township in Cape Town.

Seven local volunteers recently returned from the trip, part of the Niall Mellon Township Trust, where they built and refurbished classrooms, a playground, and painted murals for eight days in the area.

The township, Imizamo Yethu in Hout Bay, outside Cape Town, is an 18 hectare settlement houses approximately 33,600 people with little or no infrastructure for sustainable living. The settlement has dismal water facilities with very few toilets and no sewerage system.

From the Belleek area, there was Barney O’Loughlin, Jerome O’Loughlin, Ann McCann and James Cox.

And, from the Monea/Derrygonnelly area, there was Adrian McGovern, Orla McGrade, and Mary Jones.

For Barney, a joiner, this was his sixth trip with the trust.

“Every trip I’ve been on is different, we’ve been to different townships and Imizamo Yethu is one of the poorest. It’s built on the side of a mountain. Unfortunately this year when we were there was a fire which burned down 40 shacks, and there were three dead including a child,” Barney explained.

There were a total of 290 volunteers, mainly from Ireland.  The Fermanagh volunteers were involved in work at the school, which has around 1200 pupils.

“We built a fairly big playground – on the last day we were there all the kids came out to play on the playground and that for me was very emotional – to see what your work has achieved and the fun they were having.”

And, Barney thanked those who had helped in fund-raising across the community.

“The two areas raised so much money which showed the generosity of the people in Fermanagh.”

Barney is hoping to travel with the trust later this year, to work on three school’s in Nelson Mandela’s native Eastern Cape.

You can help donate by visiting: https://www.justgiving.com/Barney-OLoughlin2014.