Advertisement
HomeHeadlineFarmers upbeat after taking their case to Stormont
Advertisement 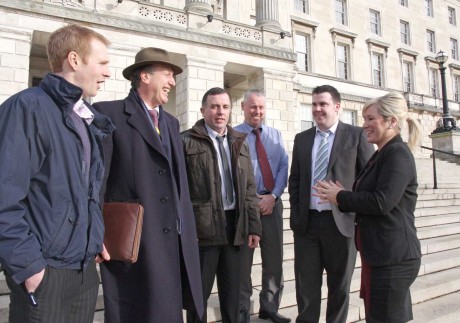 Chairman of SDASG Peter Gallagher, along with 14 committee members, outlined a number of issues during the meeting including the CAP reform policy, areas of natural constraint and rural development.

The group travelled to Stormont and met with the minister’s special advisor and agriculture spokesman as well as local MLA Phil Flanagan.

Speaking after the meeting, Mr Gallagher said: “The minister responded very positively and said she was always willing to listen and appreciated this was about meeting the concerns of the group and was prepared to meet anytime. She listened to the voice of the farmers and appreciated that our voice was coming from the ground.

“Everybody was very pleased and felt it was very informative for both sides.”

Following the meeting Ms O’Neill said: “It was good to meet the representatives from the various groups and hear, at first hand, their views on the key issues which they see as important for their areas and indeed their future.

“Following the closure of the consultation on the Policy Options Arising from the Reform of the CAP on 17, January 2014, my officials are currently collating the views received from stakeholders. The fact that we have received over 850 responses from individuals and organisations, clearly demonstrates the impact that the implementation of a new Pillar I Direct Payments system will have on farmers across the north.

“I will want to consider all responses carefully before decisions on implementation are made over the next few months in preparation for notification to the EU Commission in August 2014.”