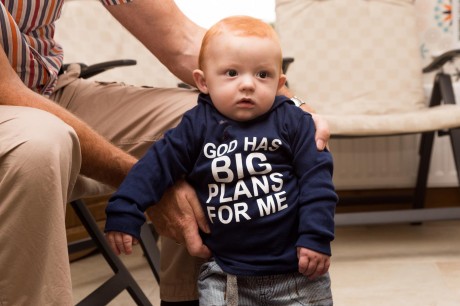 A BRAVE little nine-month old boy, Jenson Scott, who suffers from a severe liver condition, was airlifted on Saturday last, by air ambulance, to Birmingham Children’s Hospital where his condition as first diagnosed when he was just six weeks old.

Jenson lives in Maguiresbridge with his parents, Stephen and Gillian, and his older brother, Elthan.

When the Herald featured his story some weeks ago, it evoked widespread interest in Jenson’s welfare.

“Unfortunately, on Thursday last week, he began to bleed internally again and was admitted to the South West Acute Hospital Children’s Ward.

“After tests and contact with the hospital in Birmingham, they carried out tests and began medication. After one of the scans, Birmingham Children’s Hospital said they would need to see him and would ring when a bed became available.

“That was on Friday evening at 5pm. On Saturday afternoon, a bed became available and he was airlifted from St Angelo airport at 7pm.”

Jenson suffers from Biliary Atresia, a liver disease that affects 80 children every year across the UK.

Mr Scott said his son had an endoscopy and biopsies on Monday morning.

“ The results of the biopsies will take a few days to come back, and there is another scan they want to carry out to eliminate any possibility that it was something else that has caused the bleed, but he does have varices above and below his liver caused by problems with the liver.”

Stephen explained that varices are like veins, but can swell up although doctors can normally fit a band to stop the vein bursting, which would be fatal.

“The consultant is speaking with other experts in that field and waiting the other results before deciding what the best course of action is. It is possible that the swelling could go down and that would be excellent news.”

Mr and Mrs Scott are relying on their deep faith, along with the skills of the doctors and nurses, to pull them through.

“As we emphasised before”, he said, “we would greatly value prayers for Jenson.”