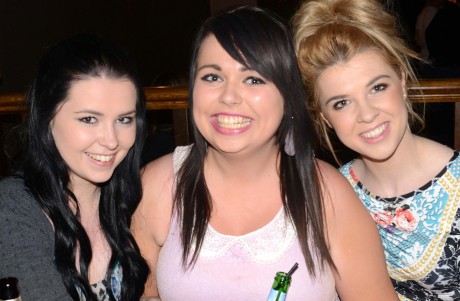 OUT ON THE TOWN…Emer Jones with Aine Fivey and Niamh Jones,

THE traditional Saturday night in town is getting a bit of a nudge off the top spot, it appears, with the now customary Wednesday night returning to bars in Enniskillen.

“Wednesday nights have been generally classed as a student night – and it’s about inviting people into town when otherwise they wouldn’t,” explained Mark Edwards, general manager of Blake’s of the Hollow.

The bar launched their Wednesday nights several weeks ago, and will run them until September.

“The Wednesday nights are busy,” Mark continued, “the customer profile is a lot younger but they definitely like to enjoy themselves.

“Whereas the Saturdays would lend themselves to a larger customer profile, and obviously a lot more people go out for something to eat at weekends.”

“Rather than it being a one night a week town, we’re proactive in trying to encourage people in on alternative nights.

“It’s good to get people out of the house and into the town,” he added.

Ferghal Shannon, of the Crowe’s Nest in Enniskillen spoke of how his bar were making the most of the increasing popularity of Wednesday nights, incorporating a weekly ‘open mic’ which started last week.

“It’s an outlet for local talent – we all know someone who’s sang into a hairbrush. It’s about giving people another option,” Ferghal said.

Patrick McCanny, general manager of the Bush bar in Enniskillen, said that his bar started the Wednesday nights back at the end of May – and while that first night was admittedly ‘quiet’, on recent Wednesdays he has reported ‘full capacity’.

“Wednesdays were just as busy as the Saturday nights.

“Most Wednesdays last year we had to close our doors early because of good numbers – we’re expecting the same over the summer.”

He added that there was a ‘real knock-on effect’ on other businesses in the town.