Obama might seem the obvious choice, but Putin and Cameron (!) also had their admirers. Ryan Smith took the streets to find out who tickles your fancy 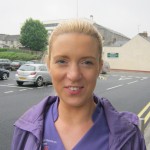 “It’s definitely Barack Obama. He’s very handsome, diplomatic, he’s a very modern type of mine. If I was taking him on a date I’d take him to Franco’s because that’s my favourite restaurant. Second best would be David Cameron – he knows how to run the country at the minute.
Shinzo Abe isn’t my kind of man – I wouldn’t find him very attractive.”

“I think Barack Obama because he’s young and vibrant. I don’t think much of Putin. I don’t know much about him but just to look at him I think he’d be a bit more old-school. She’s not on here but the Australian leader is very good looking. If I was taking them on a date I’d take them to the Lough Erne golf resort – because they’re already used to it. Shinzo Abe wouldn’t be the best – he’s not very refreshed looking.”

“I’d say Putin is the best looking. He’s got kind of a dark mystique about him. I would probably take him to Enniskillen castle ,I think that’d suit him. Obama would be the next attractive – he’s a great smile. He looks like a happy guy. Merkel is probably the worst looking – she’s kinda strict.”

“Maybe if the Argentinean president was coming – she’s quite the looker. There’s not really anything there for me. If I was a woman, maybe Obama would be ringing bells for me, or maybe Putin with the whole alpha-male thing. But they’re not doing anything for me. Putin sounds like my kinda fella, I think we could enjoy a pint together – strictly platonic.”