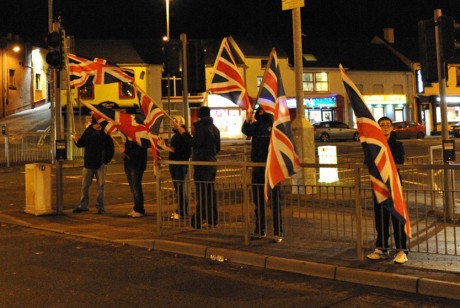 AROUND 30 Union Flag protesters arrived uninvited at a unionist meeting that included representatives of the Unionist Forum on Friday night.

The meeting was chaired by senior Orangeman, Stuart Brooker, who was joined on the panel by the DUP’s Arlene Foster, and the UUP’s Tom Elliott.

It took place at the Brooke Memorial Orange Hall, Brookeborough, with over 50 including protesters in attendance.

“I was invited by the Brookeborough division of the Orange. So I took part, and was happy to be on the panel,” said the MLA.

A source described the discussions on the current state of unionism as, ‘very aggressive’.

The source noted that in their opinion, the meeting showed that there is ‘little common ground in unionism’.

A spokesperson for the DUP commented: “A meeting of representatives of the Unionist Forum was held in the Brooke Memorial Orange Hall, Brookeborough on Friday night. This was held at the invitation of Brookeborough District Orange Lodge.”

He added: “Following a short introduction by both members, about the reasoning for and workings of the Unionist Forum, those attending took the opportunity to put forward their points, suggestions and thoughts on moving forward.”