After an early goals brace, St. Michael’s opened up a seven points lead after just six minutes of play but strong play from their Dungannon opponents turned this game on its head in the second quarter as the Enniskillen schoolboys went crashing out of the competition.

The writing was on the wall at half time with two Academy goals edging St. Patrick’s into a narrow 2-5 to 2-4 interval lead.

A third St. Patrick’s goal, direct from the restart, was a massive blow to the St. Michael’s hopes as the Tyrone lads proceeded to largely dominate the rest of the second half.

Played under bleak weather conditions on Monday afternoon in Derrylin, this play-off saw St. Michael’s get quickly off the mark. Michael Burns landed an angled 4th minute point to open the scoring.

The Enniskillen school then carved out a peach of a goal.

Diarmuid Owens intercepted inside his own half before going on a surging run to place Mattie McDermott for an unerring finish.

It soon got even better for St Michael’s when McDermott’s attempt at a point from a ‘mark’ was mishandled by the ‘keeper and Burns was on hand to bundle home at the post.

The teams then traded points with Ronan Cassidy and Burns (2) on target from frees and St Pat’s player Ben Cullen also registering to leave it 2-3 to 0-2 at the end of the opening quarter.

The Tyrone boys then got the boost they badly needed. A cross from the right found the unmarked Cullen in front of goals and he turned and beat Shea Mulligan’s diving attempt to save.

From that moment on, the game began to swing in the winners’ direction, despite the driving play out of defence by Oisin Swift and Jack Quinlan in particular.

Burns did land a 19th minute free but within a minute St. Patrick’s had struck for a second goal.

Stewartstown’s Theo Lowe, fresh from Saturday’s All-Ireland IFC semi-final victory, got on the end of a Cassidy pass and finished from close range.

A long distance point by Cullen and a brace of Cassidy frees saw St. Patrick’s lead for the first time and they weren’t to be headed again.

St. Michael’s came out again with captain, Lughaidh Donnelly now on board, but this time around it was the Academy’s turn to make a blistering start.

Attacking from the throw in, they grabbed their third major with Finn Spence netting in a goalmouth scramble.

St. Michael’s could only respond with 36th and 47th minute points from Burns and Caolan Brenna which were cancelled by Ryan Lavery and Cullen scores.

St Michael’s did press hard in the closing stages with Lanty Feeley and Burns on target but there was to be no significant breaching of the winners’ defence as MacRory dreams drifted away in the O’Connell Park wind. 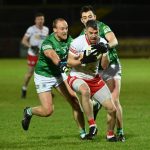 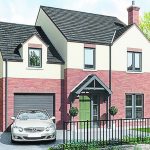 Club Éirne plans to branch out with ticket sales